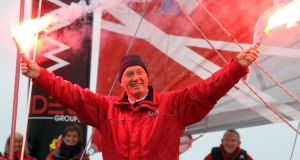 As one French trimaran smashes the Transatlantic speed sailing record this week, eight such high speed craft are assembled in Dun Laoghaire this morning on a European tour and aiming to do a similar job on the Round Ireland record, a 44-hour time that has stood for 20 years.

But prior engagements in Dublin Bay may yet mean the Route des Princes fleet gathered at the National Yacht Club miss a weather window for the world speed sailing record (WSSR) attempt.

The forecast shows tomorrow afternoon as an optimum departure time for a north about Kish to Kish attempt, the same time as the fleet is meant to be holding inshore races for Route des Prince race points between Dun Laoghaire’s East Pier and Dalkey island.

A deep area of low pressure will be passing into Scotland on Saturday, giving an ideal 20 knots of wind for any attempt.

Francis Joyon waited weeks for the weather to sweep him to a new west to east Transatlantic record completing the 2,925nm route in five days, two hours, 56 minutes and 10 seconds, demolishing the previous record set by Thomas Coville in 2008 by 16 hours, 24 minutes and 30 seconds.

A similar fate could yet befall late adventurer Steve Fossett’s 20–year–old Irish record but only if weather permits and Monday’s scheduled timing now looks less likely according to forecasts.

The Route des Princes fleet compete for both the WSSR record, and also the National Yacht Club’s own ‘Round Ireland’ record, to beat Lakota’s time set in September 1993 of 1 day, 20 hours and 42minutes.

The only Irish crewman in the fleet, Damian Foxall, aborted a previous record bid in March when the tri Omansail came to break the record but was beaten back by strong winds. At that time the Kerry Round the world race winner promised to return, and this weekend it looks like the Derrynane sailor will make good on his commitment to challenge the 20–year–old record.

Final leg
In keelboat news, although leg three of the French Figaro solo race didn’t go as well as rookie David Kenefick would have liked, the Cork harbour 22-year-old is already embarked on the final leg of the event. It’s a massive 520 miles from Roscoff to Dieppe, and the aim is not just complete the course, but finish as high as he can among the novice helms in the 41-boat fleet, after a tough month at sea.

The recently crowned ICRA class three national champion, Quest (Paul Cunningham) from Dun Laoghaire is among a fleet of quarter tonners – including boats from the Solent – travelling to Kinsale for next week’s Sovereign’s Cup. Ninety boats are entered and as well as a strong an IRC fleet, 16 1720 sportsboats are racing for European championship honours.

Racing begins tomorrow with a total of 19 races over five days.  The skiff pair will have gained confidence from last week’s gold medal win in Weymouth but bigger prizes are on the horizon. Immediately after Kiel the Ballyholme pair travel to Aarhus in Denmark for the European Championships.

On Dublin Bay, for the first time since the 1960s, the Irish National 18 championships were staged. All 15 boats travelled from Cork Harbour for the title match at the National Yacht Club. Colin Chapman and his team on ‘Aquaholics’ with a lead of seven points after discard, were comfortable  winners.

Ireland will be part of centenary dinghy celebrations in the UK next week when three Irish 12-foot dinghies travel to West Kirby for the 100 year regatta of the one time Olympic class. Irish crews racing the 1913 design are Aiden Henry, Billy Bebbington, Margret Delaney, Gerry Murray and George Miller.