Ronnie O’Sullivan signs off fourth round win with a 147 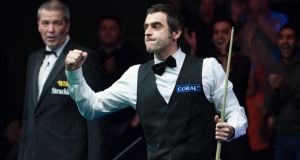 Ronnie O’Sullivan celebrates a maximum break of 147 in the final frame of his 6-0 victory over Matthew Selt during the 2014 Coral UK Championship at the Barbican Centre, York. Photograph: Tim Goode/PA Wire

Ronnie O’Sullivan finished off with a brilliant 147 break as he stormed into the quarter-finals of the Coral UK Championship with a 6-0 demolition of Matthew Selt.

O’Sullivan’s maximum at the end of the fourth-round clash at York’s Barbican Centre was the 109th in snooker history and the 13th of the Englishman’s career - improving his own all-time record.

The 38-year-old, who had a scare when the final blue wobbled in the jaws of the middle pocket before dropping, is set to earn £44,000 for the break, which is the first of the tournament.

Making the achievement even more remarkable is that the five-time world champion is playing on a broken left ankle, sustained while out running in Essex last week.

Such was the pain of the injury that O’Sullivan suggested after his first-round victory he might have to withdraw from the tournament if there was no improvement.

However, he played through the pain and on Thursday rewarded the watching public - and even fellow players Stephen Maguire and Ireland’s David Morris, who briefly stopped their fourth-round encounter on the neighbouring table to follow the action - to another potting masterclass.

Morris was later beaten 6-3 in his fourth round match after impressive wins over Li Hang, world champion Mark Selby and David Gilbert.

O’Sullivan, who rattled in four half-century breaks as well as his maximum as he swept aside Selt, will play Anthony McGill for a place in the semi-finals as he continues his hunt for a fifth UK Championship crown, and first since 2007.

“The motivation to get them is not as high as it used to be, but it’s still nice to get them and obviously I knew somewhere in the back of my mind that the roll-over was kind of mounting up,” said O’Sullivan of his maximum afterwards.

“So I thought it was worth getting the maximum because unless it’s over 40 grand you won’t be getting a max out of me mate! You’re not getting them cheap.”

O’Sullivan is now two clear of Stephen Hendry at the top of the list for career 147s, and he added of his latest: “They definitely get the adrenaline going. I already had the record at 12 and I just thought ‘well someone will have to go some to beat that’, but it’s always nice to make it that bit more difficult for someone to reach.”

The break also moved O’Sullivan a step closer to Hendry’s record mark of 775 centuries, but the Essex cueman said he was looking well beyond the Scot’s tally on that front as well.

He said: “I’ve set my sights to go to 1,000, so Hendry’s record is not something I’m looking at. I know that will get taken over eventually. I might as well set 1,000 and give somebody something to chase.”

The Rocket, who was also on for a 147 in the previous frame before falling short on 89, rattled in four half-century breaks as well as his brilliant century as he swept aside Selt — but despite the one-sided scoreline, O’Sullivan admitted he was struggling with nerves at the outset.

“It was a big match for me, a new player, a new style, I was a bit nervous out there at the beginning but I thought I handled it ok and I kind of worked my way into the match and the ending, it was a great ending,” he said.

Owen Doyle: Culture of ‘clip memory’ among modern referees not cutting it on the pitch 13:30
European Indoors: Sarah Lavin and Sean Tobin clock lifetime bests to advance 13:20
Lions tour will not take place in Australia this summer 11:39
England all in a spin once again as India seal the series 11:00
Kilmacud Crokes and a 25-year boom in women’s football 10:00