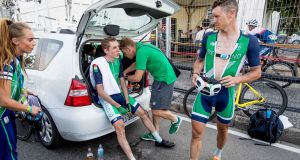 Not many Olympic events are won in six hours, 10 minutes and five seconds, which is just as well, because Greg Van Avermaet from Belgium had just enough energy left to raise his arms in victory down on Rio’s Copacabana on Saturday evening.

Just under three minutes behind, in 13th place, Dan Martin equalled Ireland’s best ever finish in the men’s Olympic road race – Ciaran Power in Athens in 2004 – and with that promptly got off his bike and buried his head in his hands in utter exhaustion. And who wouldn’t?

More spectacular and cruel and savage than any other bike race in Olympic history, this was the ultimate test of the hard men on the road: Van Avermaet took advantage of a crash which took out race leaders Vincenzo Nibali from Italy and Colombia’s Sergio Henao on the final descent, with just over 10km of the 237.5km race remaining, and then closed down on Rafal Majka from Poland, who ended up third, with Jakob Fuglsang from Denmark also coming through to take silver.

For Martin there was no regret and certainly no envy, only genuine disappointment that he hadn’t pulled off the medal that he’d hoped. The 29-year-old certainly gave himself every chance, eventually losing contact with the leaders on the third and final climb of the brutal Vista Chinesa, which included several sections with an average ascent of 10 per cent.

Team-mate Nicolas Roche also rode his heart and lungs out to finish 29th, just over nine minutes behind the winner. Martin actually had the exact same time as Britain’s Tour de France winner Chris Froome, who was given 12th place in the photo, and there was nothing whatsoever Martin would or could have done differently.

Still, there was nothing whatsoever Martin would or could have done differently, although he did suggest the lack of race information on the course meant he wasn’t entirely sure if he was still challenging for a medal or not. He also suggested there was a lack of water available out on the course as well.

“I was just saying to Nicolas there, it was probably one of the hardest days I’ve ever had on a bike,” he said. “I’ve just got nothing left. Even my hands were cramping up completely at the end, and I could just about hold on to the handlebar.

“But we’re gutted, really, not to have won a medal, because that’s the ambition we came here with. And I think it shows how far Ireland has come as a cycling country that we’re disappointed with 13th place. We’re gutted.

“To come to the Olympics aiming and believing we could medal just shows that ambition. And Cycling Ireland have been fantastic, giving the best possible support. We had a dream ride in, but just didn’t have quite enough on the day. That’s how it is.”

When you’re a city with 246km of coastline, spread out majestically between beaches and islands and blue lagoons, sweeping up to bold mountains of dense green forests, you’d like to show off as much of it as possible, especially when the whole world is watching – and that’s exactly what this race did.

The conditions, a steady 30 degrees Celsius, added to the challenge, and the breeze coming off the coast did little to cool the riders. Up in the hilly sections, the heat was even worse, the early part of the course including four laps of the Grumari Circuit, a 25km loop which features two severe climbs.

“It was super, super hot,” added Martin, “and I’m not making complaints, but being a small country, we don’t get as many accreditations as some of the bigger ones, so we had less people doing bottles. And that makes it more difficult to get water. Just having two riders was a bit of a disadvantage, but that’s just the way it is.

“But for me I rode the perfect race. The first time on the cobbles my chain came off and I lost some time, I had to make an effort to get back, but everything else went to plan. I stayed relaxed, and I wouldn’t change anything I did in the race. I just lacked that little bit on the last climb.

“And we were so flat out it wasn’t really a race. Everyone just tried to get to the top of the climbs and then looked at where they were. We’re not really racing, just going as hard as I can. We got zero information out there as well. I had no idea if there were 50 guys ahead of me or five guys. I didn’t know if I was going for a medal. I had no idea at all. And I think that was the same for everyone. There was no information on the course.

“But that’s my last race for a while, so that was the plan, to just completely empty the tank, and that’s what I did. But you have to enjoy it too. Cycling is a great sport. You’re coming up the hills, look around, and it’s all the best riders in the world. And it’s nice to be a part of that.”

Martin’s Olympics aren’t quite over yet, however, as he’ll be inside the Olympic Stadium next week to support his fiancé Jessica Andrews, who is running in the 10,000m for Britain after making a major breakthrough this season.

Froome, who was looking to equal former Sky team-mate Bradley Wiggins, who in 2012 won both the Tour and Olympic gold, also described it as one of the hardest days on the bike, and long after Van Avermaet crossed the finish line beside Fort Copacabana, groups of riders were still coming through, the jerseys and shorts caked in dried salty sweat, and their legs just about keeping the pedals spinning over.

There may never be another Olympic road race more spectacular and cruel and savage as this, which is maybe just as well.