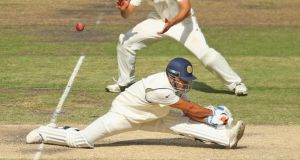 India captain MS Dhoni slips as he plays a sweep shot on day three of the third Test against Australia at the Melbourne Cricket ground. Photograph: Scott Barbour/Getty Images)

Cricket round-up: India batsmen Virat Kohli and Ajinkya Rahane struck inspired centuries during a record fourth-wicket partnership at the Melbourne Cricket Ground on Sunday to help India claw their way back into the third Test against Australia on day three.

The pair united at 147 for three in the morning and were finally separated at 409 for four after tea, having creamed 262 runs off Australia’s hapless bowlers before spinner Nathan Lyon had Rahane trapped lbw for 147.

Kohli pushed on to 169 before he was caught behind, his third century of the series driving India to 462 for eight at stumps, only 68 runs behind Australia’s mammoth first innings of 530.

Mohammed Shami was left on nine not out and though India will almost certainly concede a first-innings deficit, Kohli and Rahane’s gallant stand was another defiant response from a team that has fought hard all series only to trail 2-0.

Australia hit back late in the session after Rahane fell, with lion-hearted paceman Ryan Harris capturing two wickets to finish the day with a hard-earned four for 69 after belting a career-high 74 with the bat on day two.

“It was obviously tough through the middle there,” the 35-year-old Harris said in a pitchside interview. “But to finish the day off like that is pretty good.

“I think as a group we bowled pretty well. It was just that we didn’t take the opportunities when they came and the two guys out there put on that big partnership and batted pretty well.”

Australia wicket-keeper Brad Haddin notched his 250th dismissal with a brilliant, lunging catch to remove Cheteshwar Pujara on the second ball of the day and the 37-year-old finished the day with another terrific dive to remove Kohli.

Australia, however, rued two dropped catches after lunch that could have ended Kohli and Rahane’s stand much earlier.

Lyon spilled the simplest of catches off his own bowling to reprieve Rahane on 70, while Shane Watson grounded a sharp chance at first slip to grant Kohli a life before tea.

The pair duly punished them, lashing 39 boundaries between them on a warm, sunny day.

Kohli pulled Johnson to the fence three times in one over to have the Indian fans roaring in the crowd of 42,000.

Johnson would ultimately capture his wicket but the ICC Cricketer of the Year ended the day with ugly figures of one for 133.

Rahane was out lbw trying to sweep Lyon, though replays suggested the middle order batsman may have been unlucky.

Lokesh Rahul had a forgettable three on debut, dropped on his seventh delivery by substitute fielder Peter Siddle after an unsightly slog, then caught top-edging the next ball from Lyon at backward square leg after another appalling stroke.

Dhoni made a streaky 11 before edging Harris to Haddin, and the bulky paceman did well to catch Ashwin off his own bowling soon after.

After wins in Adelaide and Brisbane, Australia need only a draw in Melbourne to seal the four-match series.

Half-centuries from Kraigg Brathwaite and Marlon Samuels steered a battling West Indies to 147 for two at the close on day three of the second Test against South Africa in Port Elizabeth.

The tourists went through the final session at St George’s Park, brought to an early finish by bad light, without losing a wicket as Brathwaite continued his excellent 2014 unbeaten on 65.

He has put on 92 for the third wicket with the more aggressive Samuels (60) after West Indies had been rocked by two wickets in as many balls just before the tea break.

They have moved the side closer to South Africa’s first innings score of 417 for eight declared and will be confident of getting the additional 71 runs needed to avoid the follow-on.

Right-hander Brathwaite, 22, has scored 660 Test runs this year at an average of 82.50 to showcase his rich potential.

“We’ve got to stay patient with this partnership, but once we get (number five) Shivnarine Chanderpaul out we know we can respectfully race through them,” Proteas bowling coach Allan Donald told reporters.

“We knew the West Indies would come here and front up, and this pitch is probably tailor-made for a guy like Chanderpaul where he will just grind away.”

Dimuth Karunaratne thwarted a tiring New Zealand bowling attack to score his maiden Test century on Sunday before Trent Boult snapped up two late wickets to leave the hosts well positioned to wrap up the first Test on the fourth day.

Sri Lanka ended the third day’s play at Hagley Oval in Christchurch on 293 for five, still 10 runs away from making New Zealand bat again after they had been asked to follow on by Brendon McCullum when they were dismissed for 138.

Karunaratne, who had resumed on 49, scored 152 from 363 balls before he was bowled by Boult with a beautiful delivery that nipped away off the seam with about 30 minutes remaining in the day’s play.

The opener, whose previous best score was 85, was ably supported in an 87-run partnership with Lahiru Thirimanne and then added 96 runs with Angelo Mathews before he was dismissed.

1 Connell losing touch with the club championship is the real tragedy of Normal People
2 Ghosts and goalposts: The soul of street football in Dublin’s Gloucester Diamond
3 Rugby clubs in crisis: ‘I fear a lot of players won’t go back playing at all’
4 Shane Ryan: Shark attacks and gruelling shifts on a Covid-free Atlantic mission
5 Ian O’Riordan: Dreaming of one-way cycling over the Military Road
Real news has value SUBSCRIBE