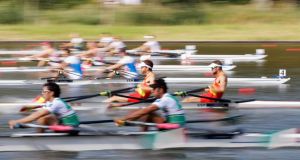 Daniel Sigurjorsson Benet and Omar Aymerich of Spain compete in the lightweight men’s double sculls at the World Rowing Championships at the Bosbaan in Amsterdam. Photograph: Dean Mouhtaropoulos/Getty Images

Ireland crews took the tally of semi-final places to three in Olympic-class events and two in non-Olympic boats on another good day at the World Rowing Championships in Amsterdam yesterday.

The upwards trajectory of Irish rowing has been confirmed at this championships. Sanita Puspure and Paul O’Donovan took their places in the world’s top 12 impressively – but the most encouraging performance on the day came from the new women’s double Helen Hannigan and Monika Dukarska, who like Puspure and the women’s pair, are in an Olympic-class event.

Hannigan (33) and Dukarska (23) competed together for the first time in the heats at the Bosbaan and yesterday faced into a tough repechage featuring world under-23 champions Romania and medal hopefuls the United States – with only two semi-final places available.

“They stepped it up, fought well and managed to get there,” said Mary McLachlan, the crew’s coach and a-top class professional who is, remarkably, working on a voluntary basis for the Ireland team. Her husband Don is the lead coach.

O’Donovan took second place in his quarter-final of the lightweight single sculls using the second-half speed which has become his trademark.

The race was far from straightforward, with Alexandr Tufanyuk of Russia in lane six occupying one of the vital top-three places until after halfway. But the top two on the day owned the third quarter: Lars Hartig of Germany took over in the lead and O’Donovan zoomed from fifth to overtake Steffen Jensen of Denmark into second. He challenged but could not pass Hartig.

Puspure looked to be on her way to winning her quarter-final of the women’s single, but was caught and passed by Russian veteran Julia Levina in the final quarter and took second.

The Ireland women’s four of Marie O’Neill, Emily Tormey, Aifric Keogh and Barbara O’Brien will compete in the B final of their 10-boat event. They finished sixth in their repechage yesterday.

The lightweight women’s double also go in their C/D semi-final at 9.33. l Details in SPORTS ROUND-UP