Rio medallist to race for a place in lightweight single final at 3.35pm on Thursday 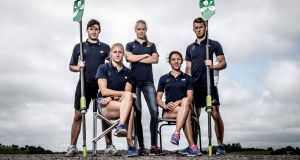 Any thoughts that the other world championship contenders would step aside and let Olympic sensation Paul O’Donovan sweep to a medal were swiftly erased at the quarter-final stage of the lightweight single sculls in Rotterdam.

In a cracking race, the Rio silver medallist in the lightweight double pulled out all the stops to win. The first three went through to the semi-finals, but form sculler Luka Radonic of Croatia – a medallist in each of the three world cups this season – put it up to O’Donovan and led to halfway. The Irishman pushed past him and led through the 1,500-metre mark, but then Colin Ethridge of the United States charged, raising his rate to 40 strokes a minute. O’Donovan bettered that, hitting a remarkable 42, and it was enough to give the UCD clubman the win.

“That was a bit of a hard one all right,” O’Donovan said. “I stayed in the pack for most of it. When I went to push on, I thought it would be the Croatian would be the one. But the American fairly feckin’ hammered it in the final 500.”

The semi-final follows in just one day, but O’Donovan said he was happy enough to have a test of his speed. “I’ve found I can recover fairly quickly.”

Rajko Hrvat, of Slovenia, the silver medallist at last year’s world championships, and Germany’s Konstantin Steinhuebel, look to be the main threats to O’Donovan in today’s semi-final (3.35pm Irish time). The German won his heat and the Slovenian finished a close-up second to Babac in his quarter-final. O’Donovan will qualify for Saturday’s A final if he finishes in the top three.

The Cork man said he did not doubt that he was in for a test in this senior non-Olympic event.

“I never underestimated these guys. They’re at this [the lightweight single] all year. Some of them are in countries where there isn’t another lightweight of the standard to make up a lightweight double for the Olympics,” he said.

The Ireland lightweight pair of Mark O’Donovan and Shane O’Driscoll compete in their semi-final at 3.50pm Irish time, with a strong chance of finishing in the top three and making the A final. The first Irish A finalists are the under-23 lightweight quadruple at 5.15pm.

Ireland crews are having a good world championships. Ronan Byrne and Daire Lynch secured qualification for the quarter-finals of the junior men’s double as they finished second to New Zealand in their heat.

The Ireland junior women’s double of Aoife Casey and Emily Hegarty are set for a repechage. They finished fourth in their heat.

1 Gerry Thornley: South African sides would be a welcome addition to Pro14
2 Liverpool maintain perfect start with win over Arsenal
3 Stuart Lancaster and Leinster ready to roll again at the RDS
4 The Offload: Springbok heavyweights heading for Pro14
5 Sporting Upsets: When Katie Taylor was stunned in Astana
Real news has value SUBSCRIBE

Liverpool make it three from three; South Africans to be a welcome addition to Pro14 07:42
Ballymun’s Dublin title one to savour for James McCarthy 06:00
Stuart Lancaster and Leinster ready to roll again at the RDS 06:00
Sporting Upsets: When Katie Taylor was stunned in Astana 06:00
Gerry Thornley: South African sides would be a welcome addition to Pro14 06:00
Here is your handy guide to sport on television this week