On Athletics: Usain Bolt documentary doesn’t go where it should

Invitation to London premier withdrawn due to awkward questions being asked 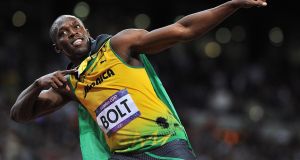 The plan was to be in London this weekend for the world premiere of I am Bolt and instead that changed to appearing on the Friday lunchtime radio show at Blackrock College. These events may not be as disconnected as they appear. Now read on.

The invitation to attend the premiere came a few weeks back, and it looked promising. I am Bolt has been in production for over a year and essentially follows Usain Bolt as he prepares to defend his three Olympic sprint titles in Rio – which of course he did.

It’s shot documentary style and judging by the trailer features several hero-worship contributions (from Serena Williams to Pele) and lots of goofing around with his mates and his coach Glen Mills.

“I really enjoy training,” says Bolt, collapsing on the track. “Ah, let me take that back.”

Except all is not what it seems. According to Geoffrey Macnab of the London Independent, “there is a dispiriting sense here that the filmmakers don’t have full control of their own movie”.

Certain subjects, he writes, are skirted over (and he’s not just talking about Bolt’s love interests): “There are managers and agents helping call the shots. The directors only refer very fleetingly to the drugs scandals that continue to dog the sport . . . Nor do they look in any depth at the Jamaican sprinting programme from which Bolt emerged.”

Anyway, this may not be the exact reason why my invitation to the premiere was withdrawn. Although not long after it arrived, it was sent back with a note from Bolt’s agent, Ricky Simms, which said: “No need to ask (me) to attend or to write anything positive about our athletes as we already know his opinion and prefer not to read it.”

This wasn’t entirely surprising – even though I’ve known Simms since his club running days back in Donegal, before he moved to London and took over the ropes at PACE Sports Management, the athletics agency business first set up the late Kim McDonald.

By “our athletes” he clearly meant Mo Farah, who Simms also represents. Because his note contained several links to articles that raised some of the concerns about Farah’s performances in Rio (such as this one: http://www.irishtimes.com/sport/other-sports/farah-runs-into-history-books-but-can-t-outsprint-suspicion-1.2756192)

As noted at the time, the problem for Farah is twofold: he continues to produce unbreakable displays of championship distance running, winning his fourth Olympic gold in Rio, only the second ever 5,000m-10,000m double-double after Finland’s Lasse Viren.

At the same time he continues to associate himself with distance running coaches of some disrepute, not just the American Alberto Salazar, who single-handedly transformed Farah from mostly also-ran to mostly invincible, but also Jama Aden, the Somalian-born, Ethiopian-based coach who was arrested by Spanish police in June for possessing an array of performance enhancing drugs.

Simms, it seems, would rather these concerns be ignored, or at least not written about. Farah, by the way, also has a new documentary coming out, No Easy Mile, available on DVD and Digital Download from December 5th.

“Good is not enough to win the gold medal, you’ve got be to excellent,” Farah says in the trailer, which also features some hero-worship from Usain Bolt.

The Aden association will most likely be ignored. This after all is the same athlete who three years ago released his autobiography, Twin Ambitions, without a single mention of doping in athletics.

Bolt, critically, has never associated himself with anyone of disrepute in doping terms, and yet at the same time concerns remain about Jamaica’s anti-doping record, particularly the gaping absence of out-of-competition testing in the five months prior to the London Olympics, which resulted in the resignation of their anti-doping chief.

Jamaican sprinters won eight of the 12 individual sprint medals available in London, and the following year, five of their top sprinters tested positive. Bolt is also in danger of losing the gold medal he won with in the 4x100m relay team in Beijing in 2008, after the retesting of samples, carried out by the International Olympic Committee (IOC), found that one member of that team, Nesta Carter, should have been originally expelled after testing positive for the banned stimulant methylhexanamine.

This IOC re-testing is ongoing, and on Monday revealed that another six weightlifters will be stripped of medals won at London 2012 due to retrospective failures. As things stand, Poland’s Tomasz Zielinski, who originally finished ninth in the men’s 94kg, is now promoted to bronze, and must now fancy his chances silver if not gold.

There was also the Wada report, last month, which recognised “serious failings” in the drug testing in Rio, with 50 per cent of target testing aborted on some days, while of the 450 planned Athlete Biological Passport blood tests, only 47 were carried out.

Still, some of us in this business are expected to sit back and watch I am Bolt and No Easy Mile and not wonder or question if all is really as it seems – or at least offer some opinion.

The students at Blackrock College radio, thankfully, aren’t open to such tomfoolery. Their show goes out for one week, every year, on 97.3FM, and Friday’s lunchtime sports slot was dedicated to the Rio Olympics.

Co-presenters Ed Brennan and Mark Murphy were open to lots of hard questions: Have the Olympics lost all morals? Should we narrow the focus of our sports to win medals? And what on earth is golf doing in there?

Despite this, and all the other negativity that surrounded Rio, they still believed in the credibility of the Olympics, and that by confronting the issues, rather than ignoring them, there was enough reason to be optimistic about their future, at least for Tokyo 2020.

Why then should I am Bolt not want to go there?