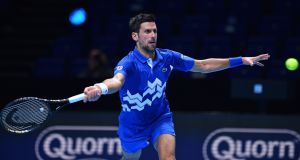 It is 50 years since Stan Smith edged out Rod Laver and the other great players of his day to win the game’s first season-ending tournament in a totally unsuitable hall in Tokyo, but this farewell 12th edition in London is struggling to create the atmosphere of a bad school-sports day.

Certainly records are still tumbling, many of them at the feet of Novak Djokovic, who this week celebrates a successful if disjointed 2020 as world number one for the sixth time, alongside Pete Sampras in the game’s modern history. But Djokovic’s pursuit of a sixth title to match the absent Roger Federer got off to a low-key start against Diego Schwartzman, his 6-3, 6-2 victory in the opening round-robin match of the Tokyo 1970 Group arriving with a smattering of applause from family and friends.

In 1970, they assembled in Japan with the game in turmoil, not unlike that which bedevils it today, as the players strove for a voice and the ATP began to take shape. The BBC was the visiting broadcaster. The players practised daily on nearby clay and competed at night on crude, fast-paced rubber. A single bulb lit the players’ dressing room, with only a gas heater for warmth. But there was huge local excitement, the unheated Metropolitan Museum packed every night with 10,000 fans, wrapped in blankets against the December cold.

During Smith’s penultimate match that sealed the title, against Ken Rosewall, they had to stop play for 20 minutes while they glued the disintegrating surface back together. After Smith won, he returned home on the first available plane to start boot camp for the US army. Uncertainty still dogs tennis (there is renewed doubt about the Australian Open going ahead), if not such old-fashioned hardships, and this rich, Nitto-backed event at least brings a troubled year to some sort of definite full stop.

The first set on day two plodded by in 42 minutes, three service breaks interrupting the rhythm before Djokovic found a big serve down the T that Schwartzman could only fend into the net. From there to the end of their sixth contest, Schwartzman (who has yet to beat Djokovic) looked out of his depth – not difficult when standing 5ft 7in in a hall filled with 20,000 mostly empty seats.

Schwartzman, who has had a fine season, tried hard all the way but when he hunted down an over-cooked drop shot and dumped it at 1-3, 30-all, then sprayed a forehand to give Djokovic his second break of the second set, what life there was in the fight escaped like air from a punctured tyre.

Djokovic, a credible version of his majestic self, struck his seventh ace, a double fault then a routine volley at the net to wrap it up in an hour and 20 minutes, an easier win than when they contested the final in Rome (after Schwartzman had cut short Rafael Nadal’s return to the game). At the start of his 12th campaign in the event (he is yet to lose in the first round), he looked relieved as much as elated. So did Schwartzman, in his first appearance in the finals.

“I’ve been playing the finals here for many years, some incredible matches and atmospheres, and I must say it feels very strange to play in front of empty stands,” Djokovic said as he cast a glance around the arena. Schwartzman added later: “I’ve never been here before, so I don’t know how it feels with people. But it’s really sad seeing this kind of stadium, the O2, totally empty. Sometimes you want to say: ‘Come on – or ‘Vamos’ in my language,’ for the crowd.”

Reflecting on his inaugural triumph in the Japanese capital, Smith told the ATP website recently: “After that week in Tokyo, I definitely started to feel like I was one of the top players.” Whoever wins here will no doubt get a similar buzz, but might not cherish the occasion so fondly.

1 Keith Duggan: Through the glories and the disgraces, we were all Maradona addicts
2 ‘God is dead’: The world’s front pages remember Diego Maradona
3 GAA Statistics: Can Cavan and Thomas Galligan beat Dublin with the long kickout?
4 Rugby Stats: Blame game at lineout time is on the whole team
5 Andy Farrell to delve deeper into Irish squad for team to play Georgia
Real news has value SUBSCRIBE