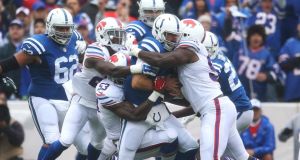 Andrew Luck of the Indianapolis Colts is sacked by Nigel Bradham of the Buffalo Bills during the first half at Ralph Wilson Stadium. Photograph: Tom Szczerbowski/Getty Images

Rex Ryan lamented that there was only one thing missing in his Buffalo Bills coaching debut.

“I think we would have gotten a shutout,” Ryan said after a 27-14 season-opening win at home over the Indianapolis Colts on Sunday. “But when you’re playing the Colts, that’s not going to happen too often.”

Karlos Williams and Boobie Dixon rushed for touchdowns as part of a ground-and-pound attack that combined for 147 yards, and Buffalo’s dominating defence put the clamps on Andrew Luck.

This was the type of approach Ryan envisioned when he laid out his “build a bully” strategy upon taking over in January.

Ryan’s decision to make Tyrod Taylor the starting quarterback two weeks ago also paid off. Taylor went 14 of 19 for 195 yards, including a 51-yard touchdown pass to Percy Harvin. Taylor also showed off his dual-threat mobility by running for 41 yards on nine carries.

Taylor outplayed Luck, who was inconsistent in the face of the Bills’ attacking defense.

Luck finished at 26 of 49 for 243 yards and two touchdowns. Both scores — Donte Moncrief’s 2-yard catch and Dwayne Allen’s 6-yard score — came in the second half after the Colts had fallen behind by 24-0. Luck also threw two interceptions.

“They beat us pretty bad,” Luck said. “You don’t let one game necessarily define you, but that doesn’t make it any easier of a pill to swallow.”

Down by 31-24 with 53 seconds left, the Rams tied the game after Seahawks defensive back Dion Bailey stumbled on Lance Kendricks’s 37-yard touchdown catch. Cary Williams’s strip of Nick Foles and his subsequent eight yard return had put Seattle up by a touchdown.

After Zuerlein gave the Rams the lead, the defense stopped Marshawn Lynch on fourth-and-1 from the St. Louis 42 to end the game.

BRONCOS 19, RAVENS 13 Darian Stewart, a safety who followed Gary Kubiak from Baltimore to Denver over the winter, snatched the ball from Ravens tight end Crockett Gillmore in the end zone with 28 seconds left to seal a win at home for Peyton Manning and the Broncos.

Joe Flacco drove the Ravens to the Denver 16 in the final minute. One play before Stewart’s interception, cornerback Brady Roby got a hand in Steve Smith Sr.’s face, and a would-be touchdown catch bounded away from Smith.

DOLPHINS 17, REDSKINS 10 Jarvis Landry returned a punt 69 yards for a touchdown with 10 minutes 22 seconds left to give Miami its first lead, and the Dolphins held on to win at Washington.

The Redskins amassed more yards and dominated the time of possession. But Washington could not pull away, and Landry delivered the decisive score.

Starting in an opener for the first time in his four-year career at Washington, Kirk Cousins went 21 for 31 for 196 yards and two interceptions for Washington. Robert Griffin III, who recently recovered from a concussion, was inactive.

Winston, the 2013 Heisman Trophy winner, became the first quarterback since Brett Favre in 1991 to have his first NFL pass intercepted and returned for a touchdown.

CARDINALS 31, SAINTS 19 Carson Palmer threw three touchdown passes in his first game back after a knee injury, and Arizona won at home over New Orleans.

Drew Brees threw for 355 yards, but the Saints had to settle for four Zach Hocker field goals.

Palmer, 14-2 in his last 16 starts, completed 19 of 32 passes for 307 yards with no interceptions. Arizona’s Andre Ellington rushed for 69 yards before being carted off with a knee injury.

The Packers got all they could handle from the rebuilding Bears but took control down the stretch to beat them for the 10th time in 11 games.

CHIEFS 27, TEXANS 20 Alex Smith threw for 243 yards and three touchdowns in the first half as Kansas City built a big lead and held on for a victory on the road over Houston.

Travis Kelce caught two touchdown passes in the first quarter, the first one after Kansas City had intercepted Brian Hoyer’s first pass as a Texan. Hoyer struggled in his debut before Ryan Mallett took over with about six minutes left and led Houston on two scoring drives to cut the lead to a touchdown.

Dalton had it easy all day, as he faced little pressure and often had receivers running free in the Raiders secondary. He connected on two touchdown passes with tight end Tyler Eifert as the Bengals broke out to a 33-0 lead and coasted.

Carolina managed just 263 yards in winning its second consecutive opener. Cam Newton, playing in his first game since signing a five-year, $104 million contract, completed 18 of 31 passes for 175 yards and a touchdown. He also ran for 35 yards and threw an interception.

TRIAL IN DEATH OF PETERSON’S SON Opening statements were set for Monday in Sioux Falls, S.D., in the trial of Joseph Patterson, 29, who is accused of killing the two-year-old son of Minnesota Vikings running back Adrian Peterson two years ago.

Patterson has pleaded not guilty to second-degree murder and other charges in the October 2013 death of Tyrese Robert Ruffin, who was the son of Patterson’s girlfriend and Peterson.

FAN HURT IN DENVER A man was hospitalized with serious injuries after falling over a railing at Sports Authority Field in Denver, the police said. The man, who was not identified, fell about 15 or 16 feet in the west stands in what appeared to be an accident. The police said he was in critical condition but did not disclose the nature of the injuries.