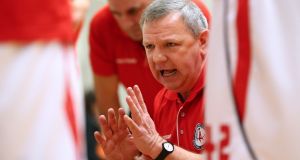 Templeogue head coach Mark Keenan has hailed his new recruits as a factor in their 100 per cent start to the men’s Super League. The Hula Hoops National Cup champions lost a number of players central to their break out season, but Neil Randolph and Puff Summers have proven key additions to date.

“Neil is a great positive guy coming into the group, the attitude and everything is right,” said Keenan. “Puff just gives us that extra bit of experience on point when it’s needed - there are a lot of young guys who will learn a hell of a lot from him.”

Templeogue go to winless Commerical.ie Éanna while UCD Marian face a Belfast Star side who beat them by 20 points on their last trip up the M1. UCC Demons face a tough test as they look to get back to winning ways with the visit of unbeaten Griffith Swords Thunder to the Mardyke.

Pyrobel Killester join the action this weekend in the Women’s Super League. Their bye-week came in the first round and gave them a chance to scout the opposition.

“We got to see a few teams play and we’re just excited to get going now. It’s been a long lead-in,” said Head Coach Karl Kilbride

First up are a Portlaoise Panthers side who are a “good young team,” according to Kilbride.

“Their American player is very athletic, she’s aggressive and did very well against Glanmire. We’re chomping at the bit now to get going on Saturday.”

Glanmire renew Munster rivalries with Maxol WIT Wildcats on Saturday. The teams won their respective home games against each other last season with just a single basket to separate them.

Meteors will look to build on an impressive win at home to DCU Mercy with a trip to newly promoted NUIG Mystics.