Michael O’Reilly qualifies for Rio and guaranteed bronze in Baku 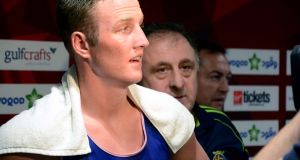 Michael O’Reilly will compete in the Rio Olympics after a quarter-final win in Baku on Thursday. Photograph: Inpho

Ireland’s Michael O’Reilly has joined Ireland’s team of seven boxers on the plane to Rio in August.

The top five middleweights in Baku qualify for Rio with O’Reilly now into the final four. O’Reilly, who would now be considered a decent hope of winning a medal in August, was the top seed in Baku.

Super-heavyweight Dean Gardiner fights on Friday and is two wins away from qualifying for the 2016 Games. Only the gold medal will get him to Rio.

“Congratulations to Michael and our coaches in staff in Baku on a magnificent achievement,” said Pat Ryan, President of the Irish Athletic Boxing Association (IABA).

“This success is testament to how our clubs are developing under the auspices and guidance of the National Association.”