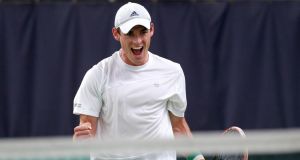 Irish number one, James McGee, was beaten in two sets in the third round of qualifying at Roland Garros. Photograph: Ryan Byrne/Inpho

After a brave opening two rounds at the qualifying tournament for the French Open, which begins on Sunday, Ireland’s James McGee fell in two sets, 6-3, 6-4 to Italian Andrea Arnaboldi.

Bidding to become the first Irish tennis player to qualify for the main draw in the men’s singles since the 1980s, Magee dropped the first set in 33 minutes before a break of serve gave the 174 ranked Arnaboldi the second set and the match in 36 minutes.

Having had one of the best wins of his career in his last match against the 119-ranked Guido Pella, the 209 ranked Irishman had some momentum going into his qualification final.

Had he been able to go the extra yard it would have been the biggest triumph of McGee’s career. To date the old Belvederian, who will be 27-years-old next month, has won four Futures events, which are significantly below Grand Slam level.

Conor Niland qualified for Wimbledon and the US Open in 2011 before his retirement. Like McGee, he also reached the second round of the Roland Garros qualifying tournament in 2010.

Louk Sorensen, whose father Sean was the last Irish man to play the main draw in 1982, also qualified for two Grand Slams but neither of them in Paris. He also played in the US Open in 2011 and the Australian Open in 2010, where he made it through to the second round.