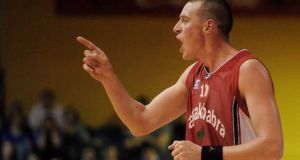 Kieran Donaghy will line out for the new Tralee basketball team next October. Photograph: Basketball Ireland

Tralee’s return to National League basketball brings with it one of Ireland’s best known sportsmen - former Footballer of the Year Kieran Donaghy.

The current Kerry midfielder was awarded Most Valuable Player in the National Intermediate Cup final last January and Tralee Town BC Chairman John Dowling has confirmed that the three-time GAA All Star will be on the roster for their maiden season.

This won’t impact upon his GAA commitments though, with the basketball season traditionally running from October to March - although with the expansion of next season’s national league things look set to get underway in late September. Kerry will be hoping to compete for Sam Maguire in the All-Ireland final on September 18th.

‘Star’ will be required to play 21 league games for Tralee, along with a maximum of four cup games.

It’ll be a big step up from last year’s commitment, with the Intermediate Cup being a purely knockout competition - one in which he missed out on the first few rounds last year due to clashes with his GAA schedule.

The 33-year-old was in impressive form during the 2016 league campaign as Kerry reached a first final since 2009, showing great fitness levels in a new midfield role - leaving little to suggest that this year will be his last for the Kingdom.

“There’s a huge buzz around with Kieran coming back,” said Dowling. “It wouldn’t have been possible to make the step up without both clubs working together and people feel like this is going to be a team for the town of Tralee.”

Basketball Ireland has announced further expansion to its National League for the 2016-17 season.

A team from Tralee will compete in the top tier of Irish basketball for the first time since 2009 while Dublin side KUBS have granted promotion from the Men’s Division One. Sligo All Stars return to Men’s Division One, where they will be joined by a Dublin Lions side taking their first foray into National League basketball. A Letterkenny based team will also enter for the first time. LYIT will draw from clubs across Donegal and surrounds and compete under Head Coach Niall McDermott.

American Mark Bernsen who won the Men’s Superleague with Abrakebabra Tralee Tigers in 2008 - to cap a run of four national titles in five years for the club - returns as head coach of Tralee Town BC.