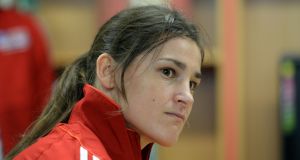 Katie Taylor more than anyone in the Barys Arena knows this was just the first step in a grand plan that goes beyond the World Championships and qualifying for Rio.

The world may have thought she was going through a process of grieving after losing in the Turkey qualification tournament last month to Yana Alekseevna. But there is more body in Taylor to allow that to pull her down.

There was some hurt alright that perhaps she needed to get out. There was venom and bristling aggression in her eight-minute beating of Agnes Alexiusson and maybe too she wanted to make a declaration.

Taylor knows that the world knows she was beaten. On that subject she had something to say and in a candid and unequivocal way, she was articulate in saying it.

“She didn’t want to leave anything to the imagination,” said her mother Bridget afterwards. The judges scored it 40-36, 40-36, 39-37 as Taylor used her stinging jab to score early in each stanza before unloading combinations as the rounds wore on.

If Alexiusson guarded high, Taylor went to work below and by the second and third high-octane rounds, the game Swede was beaten into retreat in almost every exchange.

“I went in there and just boxed,” said Katie. “I am here to win this competition. Nothing else matters to me. Yeah, I am happy with the way I performed. I thought I had it under control for all four rounds. I kept the tempo high and I was able to be aggressive.”

Alexiusson was simply overwhelmed by the combination of the defending champion’s power, hand speed and energy. Taylor had to pause twice in the third round and once in the last round for a doctor to attend her injured nose, which was bleeding after a clash of heads.

“You do have a little bit of nerves but Katie has a lot in her toolbox and we have got to start using it, transferring it into the ring,” said coach Eddie Bolger.

“She’s not a one-trick pony and she may not do that again but we are so happy with that performance.

“It was a blow out . . . maybe not giving these girls too much respect anymore. I don’t mean that in a disrespectful way. But you have to believe in yourself and that’s what we wanted to do. She is Katie Taylor.”

There was a slightly surreal feel to the opening. While Taylor’s focus possibly made her unaware of it, Billy Walsh was in corner of the adjacent ring as she faced Alexiusson.

Walsh, who left his position of head coach with Ireland to spearhead the USA’s women’s boxing programme, would have been in Taylor’s corner in past years. But here he was watching Chinese lightweight Junhua Yin beat his boxer Mikaela Mayer. That at least ends the prospect of Walsh actively coaching an American boxer against his former star.

India’s Mary Kom, a bronze medallist at London 2012, was beaten by Germany’s Azize Nimani. It was Kom’s record that Taylor equalled with her fifth World title win in Jeju, South Korea two years ago.

“I know everyone is talking about qualifying for the Olympics Games but I can’t allow myself to look that far ahead,” said Taylor.

“It’s the way I approach every championships. I look at what’s in front of me. I concentrate on that and then hopefully move on. At the moment that is the girl from Argentina.”

She meets Dayana Sanchez, who is ranked number 22 in the world. Two more wins would put the Bray fighter into the semi-finals and secure a Rio place.