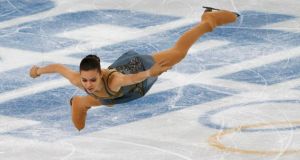 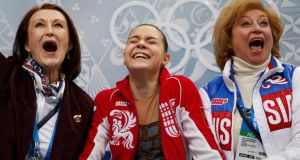 Russia’s Adelina Sotnikova (centre) reacts with her choreographer Irina Tagaeva (left) and her coach Elena Buyanova (right) ecstatic in the “kiss and cry” area after seeing her results in the figure skating final at the Sochi 2014 Winter Olympics. Photograph: Lucy Nicholson/Reuters 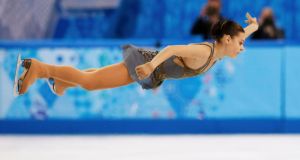 South Korea’s Kim had been favourite to join Norway’s Sonja Henie and Germany’s Katarina Witt as the only women to have won back-to-back Olympic titles but, despite delivering a flawless display, she lost her title by 5.48 points to Sotnikova.

Italian Carolina Kostner, who executed every one her jumps beautifully, earned 7.24 points fewer than the Russian and took bronze.

Yet Sotnikova was the only one of the trio who failed to produce a perfect skate, the 17-year-old snatching a landing from the double loop at the end of her triple-double-double combination jump.

Witt, who won gold in 1988 and 1994, could not comprehend the scoring. “I am stunned by this result, I don’t understand the scoring,” she said on German TV from her commentators’ booth at the Iceberg Skating Palace.

Perhaps the judges had been influenced by the fact Kim attempted only six triple jumps, compared to Sotnikova’s seven. The trio had entered the long programme separated by just 0.8 of a point following their short skates. Sotnikova then obliterated her season’s best for the free skate by more than 18 points with a score of 149.95, earning a total of 224.59. She promptly steered clear of any judging controversy.

“Any questions are for the judges, not for me. I did my job. I gave a gift to Russia,” said a jubilant Sotnikova, who had nervously paced the corridors backstage and was seen biting her fist as she waiting for Kim to finish her programme. “I smashed my season’s best. In fact, I smashed my highest score for my whole career and I did it at the Olympics. I didn’t think I could skate like I did today.”

American Ashley Wanger, who finished a disappointing seventh, was more critical of the judging.

“People don’t want to watch a sport where you watch people fall down and somehow score above someone who goes clean,” she said. “It’s confusing and we need to make it clear for people. People need to be held accountable. They need to get rid of anonymous judging. There are many changes that need to come to this sport if we want a fan base.”

Despite the judging issues, not a new issue in the sport, Russia celebrated breaking down the last Olympic figure skating barrier that had remained for the hosts. Since Ludmila Belousova and Oleg Protopopov gave the Soviet Union their first Olympic title in 1964, the 2014 Winter Games hosts, as USSR, the Unified Team or Russia, had won 26 golds in the sport before Thursday. None of them had come in the individual women’s event and they had barely featured on the podium.

Surprisingly, Sotnikova had not even been given a look-in for the team competition which Russia won 11 days ago, the country instead obsessed by 15-year-old dynamo Julia Lipnitskaya. But with Lipnitskaya failing to reproduce the magic in the individual competition, falling heavily in Wednesday's short programme and finishing fifth behind American hope Gracie Gold, Sotnikova stepped up to deliver the performance of a lifetime.

Even before she had finished her final pose, the crowd erupted and were on their feet.

“Today I realised that I really love what I do and I can skate very well,” Sotnikova said. “I am really happy because this is the Olympics and I worked toward this for a very long time. I might be 17 but I dreamed of making it to the Olympics and getting a gold.”