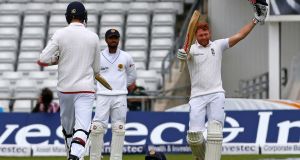 England’s Jonny Bairstow celebrates after reaching his hundred in the Test match against Sri Lanka at Headingley in Leeds. Photograph: Getty Images

The Yorkshire player, prolific for much of the past year and especially on his home ground for club and now country, finished with 140 out of 298 on day two of the first Test.

The wicketkeeper then picked up five catches, as Anderson (five for 16) – at a venue where he has never previously taken more than three wickets in an innings - and Stuart Broad (four for 21) hustled Sri Lanka out for just 91, before Alastair Cook enforced the follow-on.

After the tourists had lost three wickets in nine balls to stumble to 12 for three, Anderson returned to end any hope of a revival with three successive wicket-maidens.

Bairstow had dominated stands of 141 for the sixth wicket with Alex Hales and then 56 for the ninth with Steven Finn.

There was to be no hard-earned maiden century for Hales, though, the opener grinding to a near halt and eventually having to settle for a career-best 86 from 206 balls in almost five-and-a-half hours.

The century partnership, between England’s only two batsmen to pass 20, arrived after 10 minutes of another overcast morning.

Bairstow dominated with 67 of them and went on to a richly-deserved 145-ball hundred, thanks to an overthrow from Kaushal Silva at cover for the two scurried runs still required before raising his arms aloft in front of a delighted crowd on his home turf.

The Yorkshireman offered one clear-cut chance on 70 when he mistimed a drive back at Nuwan Pradeep – who lost his footing as the ball arrived and put it down.

His footwork was decisive, back or forward, and he barely missed a scoring or boundary opportunity – running with urgency too to ensure a healthy exchange of strike.

It was a proactive approach which was a blessing for his partner too.

But pressure still mounted a the other end and Hales’ attempt to break out foundered when he drove Rangana Herath into the hands of deep cover.

Moeen Ali was caught at short-leg from a thick edge on to pad off Dushmantha Chameera (three for 64) – the third duck of England’s innings – and Broad edged on to his stumps in the same over.

England had lost three wickets for nine runs, but Bairstow held firm to reach his century in company with Finn – and take on the second new ball after lunch, including 18 runs from one Pradeep over, before skying a catch to deep mid-on off Chameera.

Finn was then last out, stumped charging at Herath as he tried to nick a few extra runs.

But it was soon clear England had plenty.

Their new-ball pair were instantly expert, Broad swinging one back away from the left-handed Dimuth Karunaratne from round the wicket and doubling up with one that left young number three Kusal Mendis as both made ducks.

In between, Anderson produced a brute of a delivery to have Silva caught-behind too from short of a length.

When Ben Stokes then struck with the first ball after tea, Dinesh Chandimal neatly caught by James Vince at third slip, any recovery had faltered.

But it was Anderson who upped the ante, in his devastating second spell.

First, Angelo Mathews was beaten on the defence for lbw – a decision which would have been overturned on impact had he gone to DRS.

Anderson, up to sixth above Kapil Dev in the all-time list of leading Test wicket-takers, then had Dasun Shanaka – caught-behind, of course – as the tourists too recorded three ducks, before Herath edged routinely to a fourth slip.

There was no way back, Sri Lanka’s only respite coming when bad light prevented further damage following on after just two more deliveries from Anderson which yielded a leg-bye.