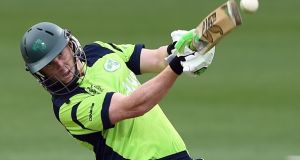 Kevin O’Brien helped steer Ireland to a draw on the final day against Zimbabwe A in Harare. Photograph: Getty

Ireland’s cricketers batted out most of the final day to secure a draw with Zimbabwe A in Harare.

Zimbabwe A batted on for four overs in the morning adding a further 26 runs to set Ireland a target of 386 in 84 overs.

Paul Stirling was rested from the final day - nursing a slight leg strain - so it was Niall O’Brien who opened the innings with Stuart Poynter.

Poynter was the first to go - unable to follow up his first innings century - edging Vitori to depart for 7.

Andrew Balbirnie made 17, while O’Brien struck four boundaries in a fluent 39 before being trapped lbw by Vitori.

Gary Wilson and Stuart Thompson both made 25, but at 141 for 5 and almost 40 overs remaining, the Irish were struggling.

John Mooney and Kevin O’Brien showed all their experience adding an unbroken 130 for the 6th wicket to ensure the draw.

Mooney struck 11 boundaries in his unbeaten 65, while O’Brien found the boundary ropes nine times in his 56 not out.

Ireland now fly to Windhoek where their InterContinental Cup clash with Namibia gets under way on Saturday.

Zimbabwe A drew with Ireland