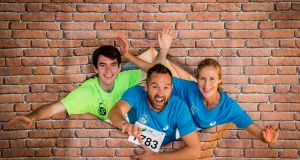 Paul Pollock, who has spoken out about the need for WADA exemptions, with Catherina McKiernan and Keith Walsh, Break Through The Wall, Irishtown Stadium, Dublin. ©INPHO/Morgan Treacy

Imagine you are a female athlete and you are receiving hormone treatment for fertility issues and have not been able to have children. The treatment requires taking hormones which will ensure your next urine specimen will test positive.

Imagine you are a male hockey player and you have been diagnosed with cancer. The treatment is encouraging and you have a good chance of surviving. But the drugs required are on the World Anti Doping Agency (WADA) list as being prohibited. If you take them you will test positive.

In both instances athletes can seek a Therapeutic Use Exemption (TUE), whereby they are assessed by doctors and a rational decision made on the basis of their condition.

Eight months ago Irish Olympic marathon runner Paul Pollock fractured a bone in his foot that required a steroid injection to aid the recovery process. Pollock works as a doctor in the A&E department of the Royal Victoria Hospital in Belfast and took an injection into the joint of one of his metatarsals. He requested and received a TUE.

The TUEs are, he says, useful. But since the ‘Fancy Bear’ hackers also released the details of cyclist Bradley Wiggins, which appeared to suggest his TUEs held a strategic importance to the races he was targeting, their credibility has been questioned.

“With any system in place it is open to interpretation and open to corruption. But you definitely have to have a system in place,” says Pollock. “I think I was justified (in using a TUE). Medical professionals said this is the injection you need to have. I did have a steroid injection into one of my feet. I had broken one of my metatarsals and was trying to get it healed. There are cases when you do get injured and when you do need to take certain banned substances. You want to declare that. You want to be open and honest and that’s where the TUEs comes into it.

“In the public eye there is a view of all these TUEs, athletes are taking advantage of them . . . there’s doping. I think a lot more work needs to be done to convince the public that the performances they are viewing are genuine. At the minute that is obviously not the case.”

The releasing of private records of athletes, he says, goes against the fundamental principles of medicine, the foundation stone that patients own their files. He does not believe athletes should be put under pressure to make records available to the public. “As a medical doctor we are taught pretty much from day one that it’s all about patient confidentiality,” he says. “Medical notes are the patient’s notes and it is up to them to be released. So for someone else, for whatever the reason, to come in and take somebody’s medical notes and release them is wrong. Even if they have good intentions you have to say that is not your information to have.”

While Wiggins is the obvious suspect, the direct connection between the consumption of banned products and peaks in performance has not been made in other athletes named in the ‘Fancy Bear’ leaks.

Pollock also believes that if athletes wish to take prohibited substances, the TUE route would not be the most sensible one to take. “I think it is very unlikely you would go down a TUE route if you are doping,” he says.

Whether that’s the case or not, the leaks may have opened up a new arena of legal cheating.