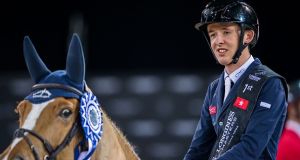 A large contingent of Irish riders are competing at the Chatsworth international horse trials in England this weekend with the majority of the Olympics squad lining out in the first leg of the new Event Rider Master series.

Limited to 40 riders based on their world rankings, the series is linked to six three-star events already established on the British calendar. It offers increased prize-money and has been devised to showcase eventing to global audiences (www.eventridermasters.tv/watch).

Co Galway’s Cathal Daniels, the youngest rider on the squad, is the first competitor to come under the scrutiny of the ground jury when he enters the dressage arena at 10.45 this morning on the mare Rioghan Rua. Aoife Clark and Fernhill Adventure will round off the Irish challenge in phase one of the event at 17.30. Show jumping and cross-country take place tomorrow.

Irish international show jumping riders are competing on both sides of the Atlantic this weekend with most interest centred on the five-star show at La Baule, France. Bertram Allen and Cian O’Connor, who are vying for Ireland’s sole spot in the sport at Rio de Janeiro, are both in action there while Denis Lynch, another contender for the Olympics, is competing in Wiesbaden, Germany along with Cameron Hanley.