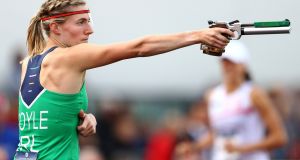 Natalya Coyle is heading to the Tokyo 2020 Olympic Games after accomplishing her mission at the European Modern Pentathlon Championships in Bath, England.

With eight Olympic places on offer in the women’s final, the 28-year-old from Meath secured hers with something to spare to give herself a full 12 months to prepare for her third Games.

Coyle finished eighth on the day and fourth among those eligible for Olympic qualification, crossing the line 14 seconds ahead of the top-ranked unsuccessful qualifier in 14th. Ireland’s Sive Brassil also performed with distinction, finishing 16th.

After a solid day, Coyle had started the decisive Laser Run event in fourth place, only 11 seconds behind the leader and effectively third in the race for Tokyo as there were two Belarus athletes ahead of her, only one of whom could qualify.

“I’m over the moon,” said Coyle. “The day went so well even though I was really nervous about qualification. I was a little rocky at the start of fencing but pulled it back in the middle.

“Then the horse riding went really well and I just gave it everything in the Laser Run. I knew I needed a solid run/shoot to finish it over. I can’t describe how happy I am.”

Given the calibre of the field – in the absence of injured Olympic champion Chloe Esposito of Australia, European women have totally dominated the 2019 UIPM season – today’s performance will go down as one of the highlights of Coyle’s career.

Coyle made her move up the leaderboard during the fencing, where she achieved 21 wins from her 35 bouts for a ranking of eighth that elevated her to sixth overall. Brassil’s prospects suffered a blow as she achieved the opposite score of 14 wins and 21 defeats.

When it came to the riding, Brassil escaped some of the major damage others were suffering but a score of 269 wasn’t quite the boost she would have been looking for in terms of Tokyo qualification.

Coyle knew that even a respectable score would keep her in contention for that coveted Olympic place. She responded with one of the best rides of the day, dislodging only one obstacle for a score of 291 that briefly gave her the overall lead.

Only one athlete, Adelina Ibatullina of Russia, achieved a perfect score of 300 and there was a major upset when the final rider, Rio 2016 silver medallist Elodie Clouvel of France, suffered elimination, throwing open the race for gold and moving Coyle one place closer to the dream outcome.

Paddy Boyd, Pentathlon Ireland chief executive, said: “We are delighted that one of the automatic qualification slots for the Tokyo 2020 Olympic Games has been secured at an early opportunity.

“We congratulate Natalya and her support team on this fine achievement, and we would also like to highlight a good performance by a promising young athlete, Sive Brassil.”

Twenty-one of the 36 berths in the women’s pentathlon in Tokyo are still up for grabs and the next opportunity for Brassil and team-mate Eilidh Prise will be the UIPM 2019 Pentathlon World Championships in September in Budapest, where three more places will be at stake.

However, Arthur Lanigan-O’Keeffe has announced that his season is over due to an Achilles injury.

The 27-year-old from Kilkenny finished 25th in the men’s final in Bath on Saturday and revealed on Twitter that he had been unable to train fully for some time due to the Achilles problem.

He tweeted: “I am heartbroken to say the least that I didn’t get an automatic Olympic qualification slot or even come close to replicating my winning performance from 4 years ago.

“Although, that being said I am still incredibly proud of what I achieved today. Not because I am content with mediocrity but because the real truth is I have been concealing an injury.”

Lanigan-O’Keeffe will still be able to qualify for the Olympics next year with ranking points on offer at a number of competitions in 2020.