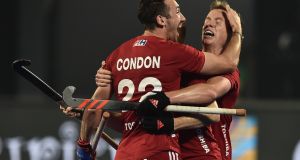 Maybe two fairytales in one year for Irish hockey was one too many. The Irish men, needing a draw to advance through to meet New Zealand for a place in the quarter-finals of the Hockey World Cup in India, fell short as England advanced from Pool B with China and Australia.

Ireland now go home with a lot of ifs and buts hanging in the air after the game with England was decided in a crazy four goal blitz over four minutes in the third quarter.

Ireland were sluggish to start, content to allow England settle on the ball and work their patterns. It seemed almost inevitable then that England would break the Irish defence at some point.

As England continued to hold the ball and the game looked as though the first quarter would close level, it took a first twist. Will Canlan worked his way along the right back line and pulled back to David Condon.

Condon stepped back out of the crowd and smashed the ball first time for England to take a 1-0 lead with just 20 seconds on the clock.

It remained that way until five minutes into the second half when Michael Robson triggered a scoring blitz when he sent a ball towards the England goal. Chris Cargo or Mitch Darling got the touch in front of goalkeeper George Pinner, Cargo got the credit for 1-1.

Less than two minutes later England hit back as Liam Ansell turned and fired a tomahawk past Irish goalkeeper David Harte for England to go 2-1 in front on 37 minutes.

Seconds later Ireland earned their first penalty corner of the match and on the retake Shane O’Donoghue’s drag took a deflection to beat Pinner again.

The Dubliner’s celebration was justified for levelling the match 2-2 and taking the record for number of goals scored for Ireland to 94.

But the spree hadn’t finished as England swept down to the Ireland end, Liam Sandford sending a powerful ball into the circle and James Gall deflecting past Harte for 3-2.

Four goals in four minutes and Ireland were chasing the match. But Harte in goal was called into making a succession of saves before Ireland’s best chance arrived from the fourth penalty corner.

The initial shot rebounded from goalkeeper Pinner and Cargo following up connected with the high ball but failed to keep it down. It floated over the crossbar and with it Irish hopes of advancing.

England’s fourth goal came in the final second of the game. The player who had switched from Ireland to England, Mark Gleghorne, converted England’s corner on the hooter.

With Harte taken off to give Ireland the extra outfield player it was a formality. Ireland end up fourth and out of the tournament knowing China was their missed opportunity.