Indoor velodrome may be in place ahead of 2020 Olympics 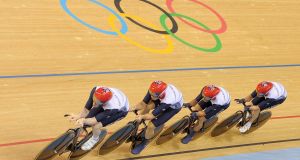 Clarifying the situation in relation to the push to finally secure an indoor velodrome for Ireland, Cycling Ireland’s chief executive has said things are moving to the next level and the federation hopes it will be finished before the Tokyo Games.

“That would be definite, we would see that as being a realistic option,” Geoff Liffey told The Irish Times yesterday.

“Sport Ireland are preparing the tender at this present moment; it is probably going out to tender in early 2016.”

News that progress was being made on the project emerged at the body’s recent annual meting, where then-president Denis Toomey said things were moving on. He hoped this would help him retain his position, but he lost out to challenger Ciarán McKenna.

Liffey said he met the design team on Wednesday, and gave guidance. “Sport Ireland is handling the tender, but we are just feeding into the requirement in terms of what the athletes would need, where a judging panel would normally be, where the TV cameras go; that sort of stuff.”

He explained the project was best split into a two-part tender due to the specialised knowledge needed.

“There would be one for the track and one for the building housing it. That is the most logical way to do it. There are only three or four people in the world who can build the track, while there are others who can construct the building.”

Reaching this point in the process and preparing a tender means the project would be ready to move once funding was made available, he added.

In related news, Eoin Mullen, Shannon McCurley and the women’s team pursuit squad will depart this weekend for the New Zealand round of the track World Cup, to be held in early December.