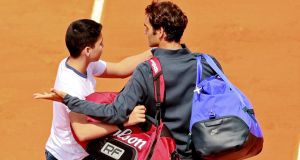 Switzerland’s Roger Federer appeals to security at Roland Garos after a spectator tries to take a selfie on court after his win. Photograph: Jason Cairnduff/Reuters

The opening day of the French Open was all sunshine and summer roses until a young man armed, thankfully, with nothing more threatening than a mobile phone camera, invaded Court Philippe Chatrier to have his photograph taken alongside Roger Federer – then strolled from the scene of his misdemeanour.

Federer, resplendent in shorts of shocking pink and a bright blue top, had just spent a leisurely hour and 50 minutes dazzling Alejandro Falla into submission in three sets of high quality, but he was decidedly unamused moments later.

A young man clambered onto the main court from one of the low-level boxes and took a quick selfie, before calmly leaving by a corner exit, where he was later detained, then banned from the tournament.

“Obviously not one second am I happy about it,” Federer said. “It happened yesterday in practice, too. Then it was just a kid, but three more kids came. And today on centre court, where you would think is a place where nobody can come on, [he] just wanders on and nothing happens. It happened during the finals in ’09 as well for me. So I definitely think that something needs to happen quickly.”

Yet nothing will happen to disturb the equilibrium of the standard procedures, it seems. Tournament director, Gilbert Ysern, suited and sweating hard in front of the media, said security had been tightened in the light of the terror attack that killed 11 people in the offices of Charlie Hebdo in Paris in January, but there would be no changes to precautions inside the grounds.

“It’s not the end of the world,” he said, “but it was embarrassing, and we are collectively responsible as organisers. We made a mistake and it won’t happen again. There is no reason for us to change security procedures. It was just a lack of judgment.”

Federer said he had spoken recently in New York to the former French Open champion and world number one Monica Seles, who was stabbed by a man wielding a boning knife while she was on court during a match in Hamburg in 1993. Seles was so traumatised she retired from the tour for two years.

If Federer, the world number two, had lingering memories of his famous tussle with Falla at Wimbledon five years ago, when the Colombian lefty served for the match at 5-4 in the fourth set after blowing a two-set lead, it was not apparent in the smoothness and power of his shots. It was vintage Federer, with eight pinpoint aces and 43 clean winners crunching the resistance out of his opponent, who is ranked 109 in the world.

Federer brought it to a calm conclusion, hunting down a drop shot and dispatching it cross court as if swatting a fly for a routine 6-3, 6-3, 6-4 win, ideal preparation for his second-round match on Tuesday against Marcel Granollers, who had a tougher time of it on Court 6, beating the German qualifier Matthias Bachinger 6-4, 6-3, 7-6 (7), the deciding set taking an hour and a quarter.

Federer’s compatriot Stan Wawrinka, fresh from having what he described as “a s**t article” about his private life removed from the official Roland Garros website, looked sharper than he has done in weeks in negotiating the challenge of Turkey’s Marsel Ilhan in three quick sets. – Guardian Service