Equestrian: Big week ahead for Irish riders in Qatar and the US

Meanwhile, the HRI has announced that Brendan Higgins has been appointed to the role of head of finance 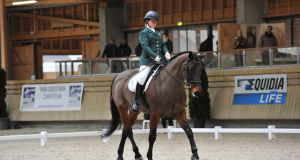 Irish show jumping riders are competing at five-star level in Qatar and the United States this week with the former venue also hosting a para-dressage qualifier for next year’s Olympic Games in Tokyo.

The Netherlands, Great Britain and Germany are the only teams qualified for Tokyo as they were the top three-ranked teams in the para dressage competition at the 2018 FEI World Equestrian Games in North Carolina last September.

There are seven qualification places remaining and these places will be awarded to the seven highest-ranked teams on the FEI Paralympic Team Ranking List (not otherwise qualified and not including the host country) as of January 31st 2020. A team’s ranking is based on each team’s best team results from two qualifying events added together.

Over the course of the three-day competition in Doha, Team Ireland will complete an individual and team test and the scores of the three highest-placed Irish athletes, determined by their percentage scores in the individual test and the team test combined, will be totalled to determine the team’s final placing.

Team Ireland’s chef d’equipe, Dara Kearney, admits that this will be a big test for the Irish riders and their horses but explains why it was important that Ireland fielded a team at Doha: “It has been a daunting task preparing to compete at this event. None of our horses have flown before, this is huge for us, but this event is an important part of our preparation for Tokyo. Should we qualify, the horses, the riders and their support teams will all have had the experience and it will be a less daunting task when Tokyo comes around.

“Each of the four combinations are in good shape, they have all been out competing early in the season. The riders have been very focused in their preparations for this event and have been working hard to keep themselves fit, as well as their horses. This is a very exciting opportunity for them all and I’d like to sincerely thank Horse Sport Ireland for their support in the lead up to the event. This journey would not have been possible without their support. My hope now is that we can come back with a decent result.”

Irish team trainer, Donie McNamara confirms that the riders and their horses are up for the challenge and are looking forward to the competition: “They are all very positive. This is the start of a new year and our first international competition of the year, we plan to do several others and ultimately the goal is to qualify a team for Tokyo. When we arrive in Doha, we will familiarise the horses with the arena and it’s all systems go after that. We are up for the challenge.”

The quartet had their first taste of competitive action on Thursday in the Al Shaqab arena where Kate Kerr-Horan was best-placed when second on a score of 68.186 per cent in the Grade III team test behind Annemarieke Roling-Nobel of The Netherlands riding Doo Schufro (68.235). The individual tests take place on Friday.

In the jumping section of the show, Tipperary’s Shane Breen partnered the 14-year-old chestnut stallion Golden Hawk (61.68) into fifth place in the evening’s 1.50m speed class which was won by Julien Epaillard of France on Virtuose Champeix (58.86).

At home, Horse Sport Ireland has announced that Brendan Higgins has been appointed to the role of head of finance at the national governing body and will take up his position on Monday next, March 11th.

A qualified accountant, Higgins and was the youngest member to be admitted to an Irish Institute in 2002. He joined the Setanta Sports group in 2004 when he was initially responsible for the financial control of its newly-launched Irish operations. He was appointed to the position of Chief Financial Officer of the overall group in 2013 and played a key part in the strategic direction and commercial operations of the business. As CFO, Brendan was an instrumental member of the executive team which returned Setanta Sports to profitability and launched geographical expansion into Eurasia.

A native of Drumree, Co Meath, Higgins has a keen interest in sport horse breeding and equestrian pursuits.

The board of HSI are in the process of developing a new five-year strategy for the organisation. They invite submissions from interested individuals/organisations to set out their views on what strategic priorities the organisation should focus on over the next five-year period. Submissions should be made via email to the independent consultants, Kotinos Partners, in developing the new strategy.