England put Australia in a spin after James Taylor ton 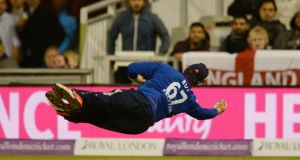 A maiden international century from James Taylor and the dual spinning threat of Adil Rashid and Moeen Ali kept England hopes alive in the one-day series against Australia. The hosts’ victory in the day-nighter also ended a run of seven defeats at the hands of the world champions.

Now 2-1 down with two to play, Eoin Morgan’s side made best use of a turning pitch after winning the toss, scoring 300 for eight through Taylor’s busy 101 from 114 balls, the value of which became more apparent as the game wore on and the tourists were strangled in their reply under lights.

Bowling out Australia for 207 in 44 overs – the catching was flawless, with Jason Roy and Steven Finn pulling off stunners – England now can set up a series decider on this same ground if they can conjure up another win at Headingley on Friday.

Morgan said: “James played beautifully, it was an outstanding performance. The wicket became more difficult to play on and he adapted beautifully. He is unique in the way he plays and I know from county cricket he can be annoying to captain against.

“The two spinners were exceptional and their five for 73 in 20 overs was outstanding considering in the last couple of games we have struggled in the middle period to take wickets. They put the Australian batsmen under pressure. As a side we were up against it and to produce such a strong performance was brilliant.”

The leg-spinner Rashid and Moeen will certainly be looking forward to the second game in Manchester given their fortunes here, returning figures of two for 41 and three for 32 respectively, while the fast bowler Liam Plunkett ensured the door remained shut with three for 60.

A word first on the batting, however, and Taylor in particular. The Nottinghamshire right-hander was the best on show in adapting to the conditions, admitting he deliberately reined in his attacking instincts as the surface got slower. Five boundaries sounds retro in this era of big-hitters but it was the glue that held England’s first innings together and meant that, despite the failure of those lower in the order, they got 300 on the board.

His 112-ball century was just reward for a batsman left stranded on 98 against the same opposition in the World Cup and who knows the man he has replaced, Joe Root, is only resting. Taylor’s removal in the final over of England’s innings, top-edging to mid-off, offered some consolation to the world’s No1 one-day bowler, Mitchell Starc, who returned his most expensive figures of one for 79. Pat Cummins, who hit 96mph at one point, was the standout bowler for the tourists with two for 50.

At the halfway stage, it felt slightly underwhelming – a lesson in itself – given they had been 200 for two with 18 overs remaining, with the No3 and Morgan well set with half-centuries already secured after an early salvo from Jason Roy, who creamed 63 from 45 balls before picking out cover to gift Ashton Agar his maiden one-day wicket on debut.

While the force is with the right-hander his opening partner, Alex Hales, struggled for rhythm with a clipped boundary through mid-wicket to get off the mark an illusion; the same shot would end a tortured nine from 31 balls when he picked out Glenn Maxwell in the ring.

Morgan’s early struggles against the spin of Agar – had it not been for Matthew Wade’s bungled take, he would have been stumped on 15 – augured well for the later defence and his 62 from 56 balls was his sixth score over 50 in eight one-day innings this summer. It ended when he toe-ended the first ball of Maxwell’s second spell to Starc in the deep attempting a ninth boundary.

England’s middle-order stalled with just 55 runs scored in overs 31 to 40 and 64 in the final 10. Ben Stokes, frustratingly out of sorts at No5, and Moeen, frustratingly low at No7, offered up high catches when trying to force the issue, either side of Steve Smith’s precision throw to run out Jonny Bairstow from mid-off. The Australia captain’s fielding matches the standard of his batting and the boos that met his arrival at the crease – a response to the Stokes dismissal at Lord’s – were unmerited.

His removal, after Morgan had evaded the onrushing Roy to remove the opener Joe Burns for nine and give Finn the big opening wicket, came in Rashid’s second over. Smith flicked a ball to mid-wicket only to see Finn fly to claim a one-handed effort at full stretch. The fast bowler took two wickets but this pouch will be his most treasure memory from the win.

At the other end Aaron Finch had muscled his way to a half-century on his international return following injury but picked out Chris Woakes in the deep to give Rashid his second before Moeen, who extracted even more turn than his partner, made a fool of Maxwell when the extravagant right-hander attempted a third reverse sweep and found Stokes at cover.

His removal of George Bailey, caught in the deep off a full toss, saw Australia 141 for five in the 29th over and struggling to stay afloat. Mitchell Marsh, profiting from a reviewed lbw off Moeen by a matter of millimetres, must have thought his luck was in. His shovel to perfectly pick out midwicket off Plunkett told him otherwise.

Agar, he of the world record 98 from No11 in the 2013 Trent Bridge Test, would have similarly been convinced his hoik into the night sky would land safely only for Roy to take the ball at the second attempt through lightning sharp reflexes. From there the game was up, with Moeen’s third a beautiful turning delivery that saw the left-hander Starc edge behind, with Plunkett and Finn then snuffing out the remainder of the tail.