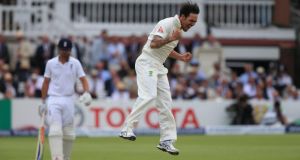 Mitchell Johnson took the wickets of Gary Ballance and Joe Root as Australia dominated the second day of the second Ashes Test at Lord’s. Photograph: PA

Australia have the second Test by the throat. After Steve Smith had consolidated his first day efforts by making 215 before he was lbw reverse sweeping – the first Test double hundred at Lord’s for his country since before the second world war – the pace attack of Mitchell Starc, Josh Hazlewood and, particularly, given his previous relationship with Lord’s, Mitchell Johnson, laid waste the England innings in the final hour or so.

If England started the day with little chance of contemplating a win, then they ended it on 85 for four – a deficit of 481 after Michael Clarke had declared the Australian innings after tea at 566 for eight – and knowing that the odds on them saving the match are already on the slim side unless they bat their socks off or the weather intervenes dramatically.

If pace was negated at Cardiff by the nature of the pitch, then criticism of Mick Hunt’s surface here was premature, illustrating once more that it is wise to see how both sides perform before making such judgments.

Australia’s use of the bouncer in the opening overs showed that if the pitch was sluggish to start, then it had loosened its stays a little, which was always going to be sufficient for bowlers capable of higher pace than their England counterparts can manage. There is another dimension too though, one which the Australians failed to exploit in the first Test: pitch the ball right up and, whatever the condition of the pitch, it is taken out of the equation. The trio gave an exemplary display of new ball bowling.

For Johnson, on for the ninth over of the innings after Starc had removed Adam Lyth with the second ball of the innings, this was a redemptive first few overs. His opening delivery, to Gary Ballance, was driven firmly through mid-off to the boundary, bringing with it the sort of derisive cheers that greeted him throughout the Cardiff match. The second was full, fast, swung a little away from the batsman, and somehow eluded a groping blade. Johnson leapt in the air and punched his delight: in Wales he had waited for one delivery short of 36 overs for his first wicket. He repeated his gymnastic celebrations in his second over too, so vigorously in fact that he might have put himself in traction, for Joe Root, the fellow who has consistently baled England out with brilliant batsmanship, had fenced at a short ball and edged to Peter Nevill, keeping in his first Test, who after a breezy 45 with the bat, now already had two catches and must think this level of cricket a doddle.

Root’s wicket was the third to fall in the space of 13 deliveries for the addition of two runs (it had cost England 382 runs before they got the Australian No5 to the wicket), with Ian Bell, perhaps not having noticed that Hazlewood can shape the ball away, already having tried to clip his second ball , another of full length, away through midwicket, only to lose his middle stump. If England had given an object lesson in bowling last week, then the compliment was being returned now.

There is a pattern emerging to this, for despite the overall improvement in the team, England have had a consistent problem at the top of the order against the new ball since the start of the West Indies tour, with scores, successively, of 34-3, 52-3, 104-3, 38-3, 18-3, 30-4, 74-3, 238-3, 62-4, 43-3, 73-3 and now, with the fall of Root’s wicket, 30-4. That is just unacceptable, and unreasonable to expect the middle order to bat them out of trouble all the time. Nor can it be predicated on an attacking mindset that will occasionally unravel: high pace can scramble the mind and requires split-second decisions, but Lyth and Root in particular were out to poor shots, Bell has become increasingly and worryingly vulnerable early in his innings, and Ballance’s idiosyncratic technique is failing him if the ball moves away, so that he is getting bowled out more than a player of his calibre ought.

Thus far it has taken an unbroken fifth-wicket stand of 55 between Alastair Cook (21 not out) and Ben Stokes (38 not out) to steady things to the close.

If the real damage had been done by Chris Rogers and Smith on the first day, then it was, nonetheless, a much better one in the field for England on the second, with seven Australian wickets falling for 229 before the declaration. There was more discipline to the bowling, helped by the understandable determination from Smith not to let slip the position that he had helped to construct.

At the forefront of this was Broad, the outstanding bowler of the first Test in Cardiff, during which match the speed gun hovered around the 90mph mark when he was operating. His rationale here was to concentrate on control and movement, throttling back, bowling within himself, and again emerging a notch above his compatriots. In this manner, he managed to swing the ball either way, not as prolifically as Jimmy Anderson does habitually, but certainly more successfully, collecting the early wicket of Rogers, and later, those of Adam Voges and Mitchell Marsh in a clever spell before gaining a bonus at the end that prompted the declaration. Four for 83 was a fine return.

The opening day had largely been without incident, but this one had began in dramatic fashion. It is hard to remember a single bouncer hitherto, such was the soporific nature of the pitch, but Anderson decided to rectify that with the opening delivery to Rogers, who, surprised maybe or just not quite awake yet, turned his head away as he ducked, and felt the ball crash into his helmet around his right ear. There was more than a little concern, including that of the bowler, and he required treatment, but then responded by cracking two off side boundaries in the same over.

Owen Doyle: Culture of ‘clip memory’ among modern referees not cutting it on the pitch 13:30
European Indoors: Sarah Lavin and Sean Tobin clock lifetime bests to advance 13:20
Lions tour will not take place in Australia this summer 11:39
England all in a spin once again as India seal the series 11:00
Kilmacud Crokes and a 25-year boom in women’s football 10:00