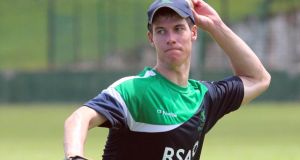 George Dockrell has recovered from a finger injury and has been named in the Ireland squad to face Pakistan in two one-day internationals next week. Photograph: Barry Chambers/Inpho

Spinner George Dockrell has been included in a strong Ireland squad for next week’s RSA One-Day International series against Pakistan in Dublin.

The 20-year-old Somerset player has been out of action with an injury to his spinning finger, but was in line to make a comeback for Trinity College in a Leinster League game last Saturday before it was abandoned due to rain.

He was named in the Somerset second XI for their three-day championship match against Northants, which got underway this morning in Taunton.

Dockrell is one of seven County-based players in the 14-man squad that will be captained by Warwickshire’s William Porterfield.

North County all-rounder John Mooney is named in the squad but will miss the first of the games as he serves out a three-match suspension.

Pakistan travel to Ireland as part of their preparations for the upcoming Champions Trophy in England.

Ireland coach Phil Simmons is hoping for another major scalp in the two matches at Castle Avenue after letting slip opportunities to beat a couple of Test-playing nations in recent years.

“We’ve always got a chance in our conditions,” Simmons said. “We’ve turned in some strong performances in recent years especially against England and Australia and lost matches we should have won.

“We’re getting stronger all the time and we’ll be well prepared and try to put them under pressure from the start.

“We know how important it is to keep the momentum going with Irish cricket and we’ll be looking for headline victories in our marquee games this year.

“This is more or less a settled squad and it’s up to those on the outside to force their way into the reckoning. There’s plenty of chances available for them to do just that with Ireland A fixtures and of course the RSA Inter-Provincial Series.”

Meanwhile, Leinster Lightning made a brilliant start to the first day of their Inter-Provincial Championship clash at College Park in Dublin this morning against the North West Warriors.

After being put into bat by Leinster skipper Kevin O’Brien, the visiting team were reduced to 100 for seven at lunch, with O’Brien and North County’s Eddie Richardson both taking two wickets apiece.