Djokovic closes season with another win over Federer 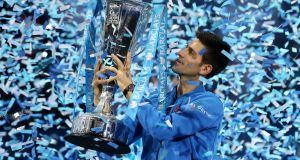 He was worth it, holding his nerve under intense pressure as the Swiss strove against tiredness to make a fight of it. The world No1, ridiculously ahead of the field in the rankings, picked up 1,300 points he probably did not need in winning 6-3, 6-4 in 80 minutes and is unchallenged on any surface against any opponent as the best player in the world.

It was his fifth win over Federer in eight matches this year and drew him equal at 22 apiece in their career rivalry. Together they have won 11 of the last 13 season-ending titles, Federer taking six in all in a record 10 finals, Djokovic’s tally now standing at five in all.

It was not as routine as the score suggests but Djokovic finished the stronger. At 28, he is seven majors and six years behind the 17-slam, 34-year-old Federer, although the Swiss holds up extraordinarily well in even the toughest examination of his stamina and strength.

“Even though it’s never fun being on the not-winning side, it’s good to be playing at all,” Federer said, in reference to his last-minute withdrawal from last year’s final. “Novak has had an unbelievable year.”

You could say that. He won three majors, stopped only in Paris by Stan Wawrinka who, for one glorious afternoon, was residing on another planet. Elsewhere, including Wimbledon and Flushing Meadows, where he was too good for Federer, he was frighteningly good.

This was never going to be a repeat of their match on Tuesday when Federer pretty much caught Djokovic cold. Armed with such recent intelligence the Serb was always going to come much better prepared for the final. “He was better in the group stage so I had to change something,” Djokovic said. “I returned better, made him play more shots . . . I was glad to keep the focus and concentration up after a long season. Now I go on holiday to recharge my batteries.”

The second set was closer although there was always a feeling that Federer was struggling. He had to save three break points in the eighth game but Djokovic came at him again strongly in the 10th.

The pro-Federer crowd leaned forward, fearing the worst, when Djokovic grabbed two match points on their hero’s serve. He saved one and then, to the astonishment of all, Federer handed his rival the title with a double fault, his second of the match. Not many present could remember him ever having lost a match that way.