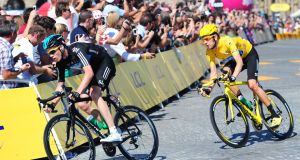 Bradley Wiggins and Chris Froome are among five British athletes whose medical records with the World Anti-Doping Agency have been leaked by computer hackers. Photograph: PA

British cyclists Chris Froome and Bradley Wiggins have said they have nothing to hide after they became the latest athletes to have their medical records hacked.

The personal information relates to ‘therapeutic use exemptions’ (TUEs) that enable them to take medicine that otherwise would be banned by the World Anti-Doping Agency.

The medical data of 29 athletes from eight countries, almost half of them from the United States, has now been stolen from Wada by a Russian-based cyber espionage group called Tsar Team (APT28), or ‘Fancy Bears’, and published online.

In a statement, three-time Tour de France champion Froome said: “I’ve openly discussed my TUEs with the media and have no issues with the leak which confirms my statements.

“In nine years as a professional I’ve twice required a TUE for exacerbated asthma, the last time was in 2014.”

Froome’s two TUEs were for short courses of prednisolone, a steroid used to treat acute chest complaints, in 2013 and 2014.

The latter was controversial at the time as it was granted retrospectively to enable the 31-year-old Froome to take part in a key Tour de France warm-up race in Switzerland, despite being ill a week before. He would go on to win that race but his TUE application was cleared by cycling’s governing body the UCI and Wada.

Wiggins’ six TUEs are for asthma and allergy medication he was taking between 2008 and 2013. The last three are for injections of triamcinolone acetonide, a corticosteroid used to treat extreme reactions to pollen.

Some might say this runs counter to Team Sky’s claims of having a ‘no needles’ policy but it is entirely within the rules and Wiggins, Britain’s most decorated Olympic athlete, has spoken about these issues many times.

A spokesperson for the 36-year-old said: “There’s nothing new here. Everyone knows Brad suffers from asthma.

“His medical treatment is BC- (British Cycling) and UCI- (International Cycling Union) approved and like all Team GB athletes he follows Wada regulations to the letter.

“The leak of these records is an attempt to undermine the credibility of Wada and that’s something for them to deal with.”

Team Sky, the British team Wiggins left in 2015, said all of its TUE applications have been “managed and recorded in line” with the rules.

A spokesman for British Cycling echoed these sentiments, saying it was “proud of (its) strong anti-doping culture” and “condemned the publication of any individual’s medical information without their permission”.

UK Anti-Doping agrees and has written to all members of Team GB to warn them that the personal information they have provided Wada is at risk of being hacked and leaked.

The BBC reported that 53 British Olympians had TUEs in Rio.

So far, as well as the two cycling stars, rugby sevens player Heather Fisher, golfer Charley Hull and rower Sam Townsend — all of whom competed in Rio last month — have had their exemptions for asthma medication leaked.

Chief executive Nicole Sapstead said Ukad “strongly condemns” the actions of the hackers and is “appalled” that five British athletes have had their private data made public.

“Not only does it undermine our work and the protection of clean sport, but it is grossly unfair to the athletes,” she said.

“It is important to note that in the UK applications for TUEs are assessed by at least three independent medics and are then referred to Wada, which has further independent oversight.

“This robust process is in place to ensure that TUEs are granted based solely on medical need — they are not an indication of doping. They are there to support the clean athlete’s right to compete, despite a medical condition.”

Having revealed on Tuesday that it has been under repeated cyber attacks originating from Russia, Wada confirmed on Thursday that a second, larger leak had occurred.

The statement did not name the athletes but revealed the nationalities. The names, which include 11 medallists from Rio, had already been published by the hackers.

Wada director general Olivier Niggli said: “Wada is very mindful that this criminal attack, which to date has recklessly exposed personal data of 29 athletes, will be very distressing for the athletes targeted and cause apprehension for all athletes who were involved in the Olympic Games.

“To those athletes who have been impacted, we regret that criminals have attempted to smear your reputations in this way and assure you that we are receiving intelligence and advice from the highest level law enforcement and IT security agencies that we are putting into action.

“Given this intelligence and advice, Wada has no doubt these ongoing attacks are being carried out in retaliation against the agency, and the global anti-doping system, because of our independent (Dick) Pound and (Richard) McLaren investigations that exposed state-sponsored doping in Russia.

“We condemn this criminal activity and have asked the Russian government to do everything in their power to make it stop.”

The TUE leaks follow an earlier cyber attack from Russia that tried to find the whereabouts of Russian doping whistle-blower Yuliya Stepanova and her family, who are now living in hiding in the US.

But speaking to journalists at the Uefa congress in Athens on Wednesday, Russian sports minister Vitaly Mutko denied any state involvement in the hacking, and said his country was also a victim of the attacks.

And Russian boxer Mikhail Aloyan, a two-time world champion and silver medallist in Rio, has had his TUE for a nasal decongestant listed on the Fancy Bears website.