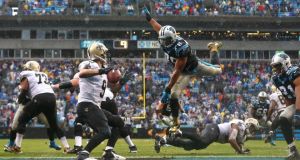 Carolina Panthers’ Greg Hardy closes in on Drew Brees (No 9) of the New Orleans Saints during the clash at the America Stadium in Charlotte, North Carolina. Photo: Streeter Lecka/Getty Images

On a pulsating penultimate Sunday that dripped with high drama and nail-biting action, nowhere were tensions running higher than in Charlotte, North Carolina where Carolina quarterback Cam Newton engineered a last gasp touchdown drive to cap a thrilling 17-13 win over the New Orleans Saints (10-5).

Victory gave the Panthers (11-4) their first trip to the post-season since 2008.

After Drew Brees had marched New Orleans 97 yards, hitting Jimmy Graham for a go ahead touchdown, Newton went right to work, preventing the Saints from clinching the NFC South division crown and a first round play-off bye.

With 55 seconds left on the clock and no timeouts, Newton took the Panthers 65 yards on five plays hitting Domenik Hixon with a 14-yard touchdown strike to stun the Saints and send the sellout Charlotte crowd into wild celebration.

“Man it was so close,” said Newton. “We have to win games like this, it wasn’t pretty but this is the definition of a play-off team, a play-off game, real close.

“We depended on the defence at times but when we needed to score we did.”

That result coupled with Miami Dolphins’ loss to the Buffalo Bills was enough to earn the Bengals a third straight play-off appearance.

Later on Sunday, the Bengals had more to celebrate when the Patriots crushed the Ravens 41-7 earning Cincinnati the AFC North crown.

Even before New England (11-4) had kicked off against Baltimore they had clinched a fifth straight AFC East crown and play-off spot when the Dolphins were upset 19-0 by the Bills in icy Buffalo.

In Houston, Peyton Manning enjoyed a record smashing day throwing four touchdown passes as the Broncos (12-3) tamed the Texans 37-13 nailing down a third consecutive AFC West division title and a first round bye after the Chiefs (11-4) were surprised 23-7 by the Colts (10-5).

Manning’s four touchdown strikes gave him 51 for the season eclipsing the record of 50 set by the Patriots’ Tom Brady in 2007.

The San Diego Chargers remained in the AFC playoff hunt with a 26-13 win over the Oakland Raiders. (Reporting by Steve Keating in Toronto.

In the AFC, the post-season puzzle is nearly complete with the Patriots, Bengals, Denver Broncos and Indianapolis Colts all confirmed as division champions and the Kansas City Chiefs having also secured a playoff berth.

With just one week remaining on the regular season schedule, the Miami Dolphins (8-7), Baltimore Ravens (8-7), San Diego Chargers (8-7) and Pittsburgh Steelers (7-8) will battle for the AFC’s final wildcard spot.

Things are not as clear in the NFC, where all four division crowns are still up for grabs and only the Seahawks and Panthers have locked up playoff positions.

The Seahawks entered Sunday with the NFL’s best record and unbeaten at home for two seasons but fell to 12-3 after being upset by the surprising Arizona Cardinals (10-5), who kept their own playoff dreams alive with a gritty 17-10 victory.

Cardinals quarterback Carson Palmer threw four interceptions but the Arizona defence could not be breached as Seattle failed to secure the NFC West division crown and home field advantage throughout the playoffs after suffering their first home defeat since Dec. 24, 2011.

After the Detroit Lions’ (7-8) playoff hopes disappeared in a 23-20 overtime loss to the New York Giants and the Green Bay Packers (7-7-1) fell 38-31 to the Steelers on the Frozen Tundra at snowy Lambeau Field, the door was left wide open for the Chicago Bears (8-7) to close out Sunday action by locking up the NFC North.

But the sleepy Bears were demolished 54-11 by the Philadelphia Eagles (8-7) setting up a pair of winner-take-all matchups in next weekend’s regular season finales with Chicago taking on the Packers for the North crown and Eagles going up against Dallas Cowboys (8-7) for the East title.

The Cowboys kept their post-season hopes alive when Tony Romo found DeMarco Murray with a 10-yard touchdown strike with just 68 seconds left on the clock to eke out a 24-23 win over the Washington Redskins.

Glorious Greenwood as Man United thrash Bournemouth 17:28
Serpentine stays on from the front to steal Epsom Derby for Aidan O’Brien 17:24
Love tears them apart in stunning Epsom Oaks romp 16:33
Valterri Bottas pips Lewis Hamilton to pole in Austria 15:43
Chris Martin steals a point for resurgent Derby against Forest 15:23
Here is your handy guide to sport on television this week