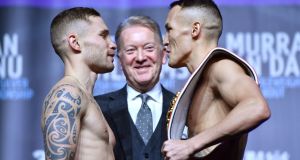 Carl Frampton and Josh Warrington during the weigh-in at Manchester Central ahead of their fight on Saturday night. Photograph: Anthony Devlin/PA Wire

Carl Frampton had the utmost confidence he would get to fight on the world stage again after experiencing frustration both in and out of the ring over the last couple of years.

Frampton ascended to new heights when he wrenched the WBA featherweight crown from Leo Santa Cruz in July 2016 but the following year proved to be wretched for the Northern Irish man.

He surrendered his title to Santa Cruz six months later, a proposed homecoming against Andres Gutierrez was cancelled at the 11th hour because of an injury to the Mexican and he split with his trainer and promoter.

Now coached by Jamie Moore and with three wins under his belt since losing for the only time as a professional in the rematch to Santa Cruz, Frampton is set to challenge Josh Warrington for the IBF title at 126lbs this weekend.

And the Belfast fighter says he never wondered whether he would get the chance to challenge for world honours once more ahead of the showdown with Warrington at the Manchester Arena.

The former two-weight world champion said: “I never doubted it, I always had complete self-belief and I knew that I’d get there.

“I’ve gone round the houses to get here. You unify against [Scott] Quigg [at super-bantamweight], you beat Santa Cruz and then you lose to Santa Cruz.

“I should have been walking straight back into a world-title fight but it’s taken me a cancelled fight and three other fights to get here so I’m not going to let anyone rip it away from me.

“But I’ve always had that belief that I’ll get back to the top. It starts by beating Josh on Saturday night.”

Both fighters weighed in just below the nine-stone weight limit on Friday, with Frampton, the betting favourite with bookmakers, five ounces heavier.

Frampton has seen off the relatively low-key threats of Horacio Garcia and Luke Jackson either side of an impressive win over Nonito Donaire since the setback to Santa Cruz.

And the 31-year-old has no doubt he is ready to mix at the elite level once more.

He added: “I’m ready for these boys, I’m ready to beat all the top featherweights in the world and that includes Josh.

“I’m the better fighter. I intend to prove it. I’m not going to predict any sort of method of victory.

“If it takes 12 hard, gruelling rounds, I’m prepared for that, but also I think that his style plays into my hands and I have the power to take him out.”

Warrington is making the first defence of the title he won by upsetting the odds at his cherished Elland Road against Lee Selby in May.

The unbeaten Leeds fighter is unconcerned by Frampton’s barbs about being the superior fighter as he looks to spring another surprise.

He said: “I feel like he’s a salesman for a spirit level company, he talks about levels that much!

“I feel like he’s overlooking me but I’m only concentrating on what I need to do. I felt like Selby was overlooking me as well. I’ve been overlooked my whole career but I just turn up, do the job and go home.”

The prospect of travelling across the Atlantic to take on the other champions at featherweight appeals to Warrington, with WBO titlist Oscar Valdez at the top of his wishlist in the new year.

He added: “I want to go and fight the other champions. I want to go to the States. Oscar Valdez has been talking about that fight so it’s where I want to go next.

“I grew up watching the big cards over there and now it’s within touching distance. All I’ve got to do is keep winning.”

Former world middleweight champion Billy Joe Saunders fights on the undercard against Ghanaian veteran Charles Adamu as does Tommy Fury, the younger brother of Tyson Fury, in his professional debut.