Jamaican takes World Championships gold after running a time of 9.79 in the Bird’s Nest 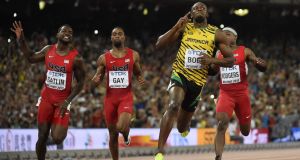 Over darkened Beijing skies, a moment of blinding light. For two years Justin Gatlin has been the undisputed king of sprinting as well as athletics’ most controversial character, but cometh the hour, cometh Usain Bolt – but by the narrowest of margins.

Gatlin is famed not only for having failed two doping tests but also for his explosive starts, while Bolt tends to rise from his blocks like a man who has slept on a rock hard mattress. This time though there was little in it at the gun or at 40, 50, 60, 70 and even 80 metres. But as they approached the line, Gatlin lost his balance while Bolt kept his nerve. In the end a width of vest separated them with Bolt winning in 9.79sec, from Gatlin in 9.80. The Canadian Andre De Grasse and the 19-year-old American Trayvon Bromell shared the bronze medal in 9.92.

For nearly two years athletics had waited for this track-and-field super fight – with Gatlin having gone into the final with an unbeaten streak that stretched back over 28 races and Bolt also unbeaten over 100m – except when easing down in heats – since being beaten by Gatlin in Rome in June 2013. As they say in boxing, somebodies O had to go, and while the winning time was nothing special the occasion certainly was.

At the start both men acted like boxers, rolling their necks and puffing out their cheeks. When he was introduced, Bolt covered his eyes with his hands before opening them and smiling; Gatlin shot imaginary bullets with his fingers before roaring into the camera.

The race was a slugfest too, with both men hammering it to the line – until Gatlin blinked. Four times this year he has run faster than 9.80, but when the pressure was on and the adrenaline blasting through his veins he wasn’t able to produce his very best.

Bolt, however, left the stadium sporting the broadest smile. It was in the Bird’s Nest in 2008 that he first announced himself as a global superstar, by winning Olympic 100m and 200m gold in world record times. And after a difficult couple of years, where he has been beset by injuries, it was once again where he found his wings.