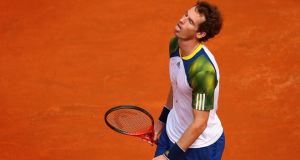 The Big Four is still alive and well as a tennis concept, but bringing Novak Djokovic, Roger Federer, Rafael Nadal and Andy Murray together in the same Grand Slam tournament is proving increasingly elusive.

Though Nadal has roared back from a left knee injury and a seven-month break and is again the favorite to win another French Open title, Murray announced his withdrawal from the tournament last night after the latest round of magnetic resonance imaging scans and other medical tests on his ailing lower back.

“It’s a really tough decision and I love playing in Paris, but after seeking medical advice, I am not fit to compete,” Murray said in a statement.

The 26-year-old Scotsman won his first Grand Slam singles title at last year’s US Open and reached the final of the Australian Open this year. He is ranked number two in the world, but clay remains his weakest surface.

He has been past the French Open quarter-finals only once, when reaching the semi-finals in 2011. Even healthy, he would have been among the second tier of contenders behind Nadal and Djokovic.

Murray has said his back problems began to surface late in the 2011 season and are linked to a disk problem. He has not offered more detail recently. After a series of painkilling injections last year, he played through back pain at Roland Garros, where he eventually lost in the quarters.

He went on to thrive on grass and hardcourts, but after retiring during a match last week with Marcel Granollers at the Masters 1000 event in Rome, he has decided not to take further risk and instead focus on trying to win his first Wimbledon title in July.

“He started preparing for Paris the very week after Miami, skipping Davis Cup, and had his sights set on a strong run through the clay, so this must not have been an easy decision for him,” said Darren Cahill, the coach and ESPN commentator who has sometimes advised Murray.

Open-stance groundstrokes, a staple of the modern game, put enormous pressure on the trunk because of the rotation required.

“Clay is also the one surface where Andy needs to generate more of his own power when in a defensive position, so that may play a part,” Cahill said.

With Nadal missing last year’s US Open and this year’s Australian Open, the Big Four have not played in the same major since Wimbledon last year and have yet to face off at a major tournament since Murray has joined the club of Grand Slam singles champions.

Next chance: Wimbledon if Murray can recover in time.