Andy Murray rediscovers power and efficiency of his serve 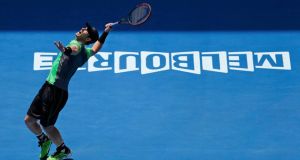 Andy Murray of Britain serves to Yuki Bhambri of India during their men’s singles first round match at the Australian Open in Melbourne. Photograph: Reuters

The serve has been like a troublesome friend to Andy Murray, helping him in good times but too often making life unnecessarily difficult. However, after tinkering with his ball-toss, body placement and striking technique to little effect recently, Murray has reverted to the method that felt most comfortable before he underwent back surgery, and he is encouraged by the results.

At the start of his 10th attempt to win the Australian Open, Murray – who is yet to get his hands on the trophy despite getting to three finals – is looking more like Wyatt Earp than Mr Magoo.

Among the many encouraging aspects of his win over Yuki Bhambri on Monday to ease into the second round, where he will meet the dangerous Australian Marinko Matosevic on Wednesday, was the power and efficiency of his serve.

It was impressive but not perfect, getting him into difficulties early in the third set when he was slow to back it up and fell 4 - 1 down. But it was far better than it was in 2014, when he struggled to adjust to the trauma of a back operation the previous September.

In 92 visits to the service line Murray aced Bhambri 13 times and did not double-fault once, winning 59 of the 118 points he compiled in the two-hour match. That’s not a bad strike rate.

“I tried, after my surgery, to change it a bit and it didn’t really help at all,” Murray said of his serve. “I served badly pretty much all of last season, so I went back to serving as I used to, and it feels way better, much more comfortable, way more disguise, far more aces. I’m more comfortable on my second serve as well, I’m way more balanced after it.

“In all the matches I’ve played this season I’ve served pretty well. I protected the second serve well here. You can say whatever about percentages of serves - and I don’t really know what they were – but I felt like I was a bit slow after the serve and that was my problem here. But the actual serve was good.”

One of the reasons Cash was able to keep the contest close, however, was his willingness to serve and volley, often behind his second serve, an attacking mindset he had grooved since the day he first picked up a racket. And, given that aggressive streak, he strove for a lot of aces: high risk, high gain. The gamble at least paid off statistically: Cash won 69 per cent of his first serves, Wilander 67 per cent.

The game has changed a lot since then, of course, as the net is a no-go area for a lot of players (Murray went there just 12 times against Bhambri on Monday, mostly to retrieve drop shots and winning six points). But the building block of tennis will always be the serve and last year was the first time since 1991 that two players, Ivo Karlovic and Milos Raonic, each hit more than a thousand aces. Murray was a respectable 14th on the list with 450 easy points.

However, there is more to serving than thrashing winners or going for steady pressure. Miss too many first serves and the anxiety levels of most players rises to worrying levels with the ball in hand. Good players have preyed on Murray’s under-powered second serve and it has cost him in big matches.

It is the second serve that is the insurance shot, the one that gets a player out of trouble, and it needs to have bite and kick.

Before Murray put his career in the hands of Ivan Lendl, he had a serving routine in practice that was awesome to witness. He would place ball canisters on the corners and the T of the service boxes and would knock them over, serve after serve, with the sort of laser-like accuracy that drives opponents to distraction.

However, Lendl saw in this routine the seeds of self-inflicted injury and told him to gear down. He did, and it helped – but his back injury changed everything. Only now is he serving again with full confidence.

“I thought I served very well the whole match,” Murray said here. “That was the most pleasing thing for me. Hopefully I’ll get a little bit better and a bit quicker after my serve and after my returns.

“I didn’t serve well last year. I tried to make some changes after coming back from surgery and it didn’t help at all. I went back to serving how I used to and that’s really helped me. I’ve felt a lot more comfortable.” Guardian service