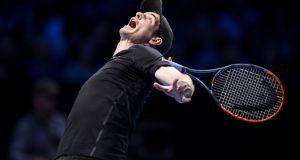 The two best players in the world, Andy Murray and Novak Djokovic, are not exactly having an easy time of it in the final tournament of the season. They head for an almost nailed-on weekend showdown, the 35th of their careers, unbeaten and resolute, but looking just a little weary.

The Scot, drenched in sweat, saved nine of 11 break points over three hours and 20 minutes – the longest in the eight years of the ATP World Tour Finals in this venue – by fighting past Kei Nishikori 6-7, 6-4, 6-4 on day four.

He was buoyed by an O2 crowd of 17,000 fans as unequivocally behind him as ever they were for Tim Henman. British tennis has its hero, but he triumphed in large part because his opponent pushed him to the limit in nearly every point.

Murray’s second match of his group was a minor marathon, more white-knuckle edgy than the Serb’s stop-go progress through two wins in the round-robin stage in the other group. It says much about the physicality of the Tour that its best champions are close to exhaustion.

Still, they remain on track to meet in Sunday’s final and slug it out for Murray’s number one ranking. That is where the core fascination of the tournament has resided since the first match, when Djokovic came from a set down to beat Dominic Thiem.

Murray had not won two matches in a row in this end-of-season tournament since his first appearance in Shanghai eight years ago. But, a semi-finalist three times – in 2008, 2110 and 2012 – he is a more mature and self-assured player at 29. And a very tired one.

His second win on the spin here, 21st over the past two months and eighth in 10 matches over Nishikori, was far tougher than his commanding 6-3, 6-2 workout in the first round of his group, against Marin Cilic.

“He was making me run a lot, but I was starting to get some free points on his serve. I managed to get enough points to win. That’s what you work for, in the big moments in big matches, and in an amazing atmosphere. That’s why you put the work in,” Murray said.

“We played five hours in Davis Cup, 4½ at the US Open, three hours 20 minutes here. I feel okay right now. It’s the following day you feel stiff. I’ll do my best to get through as many matches as I can.”

His coach, Ivan Lendl, a five-times winner of this title, joined his year-round assistant, Jamie Delgado, courtside and probably was more impressed with the player’s trademark resilience than his fluency.

When Murray belted a regulation forehand into the high section of the net rather than going for the angle on set point, Nishikori held to force the first-set tie-break. It had seemed inevitable from the first ball.

Murray was 20-8 in shoot-outs for the season, Nishikori 16-10, although the Scot was looking the more agitated now, constantly chuntering to himself. After giving up three set points, he showed extraordinary anticipation to hunt down an impossible “get” and stick a running backhand winner behind Nishikori. The arena duly rose to applaud probably the shot of the tournament.

However, the Scot blew set point, handed two more back to Nishikori and struck his final shot disappointingly wide to concede what had been a ragged, tense set after an hour and 25 minutes. The tie-break alone had taken 18 of them.

Within minutes Murray broke back, saved two break points and served out the set. Heaving for breath on his third set point, he twice faltered in the ball toss – thanks to a boorish interjection from the crowd – but finished the job when Nishikori’s forehand missed the outer edge of the baseline.

As some suspected it might do no more than 20 minutes into the match, it all came down to the third set, Murray territory. He had won a draining five-setter against Nishikori in the Davis Cup but lost in five in the quarter-finals of the US Open.

Murray broke early again. Could he get to the line this time without giving them a nervous breakdown? Paradoxically, the standard rose as tiredness consumed both players. It was a monumentally committed spectacle.

Neither held serve with comfort. Both fought for every point, serving or receiving. No ball was too far away to chase. Each success was celebrated as if it were for the final of a slam.

By the time Murray had pulled away to lead 5-1, the crowd, surely, could relax at last . . . Not quite. Nishikori held for 2-5. Just. Murray double-faulted for 5-3. Nishikori scrambled magnificently for 4-5. And Murray held to love to seal it.

It was sport in the raw, at times ugly, and indisputably passionate. Guardian service