Kilkenny have produced the only meaningful hurling revolution 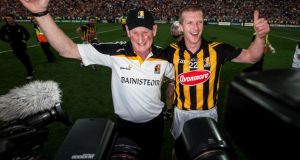 Brian Cody and Henry Shefflin celebrate another All-Ireland triupmh after the victory over Tipperary at Croke Park. It was Shefflin’s tenth winner’smedal as a player and Cody’s tenth success as manager. Photo: James Crombie/Inpho

It was probably instinct as much as accident that brought Paul Galvin to Nowlan Park in Kilkenny during the miserable summer in 2008, when red cards and friction ruined his summer as captain of Kerry .

As it happened, the first man he banged into was Ned Quinn, the consigliere of the Cats family, who gave him a tour of Kilkenny’s sepia-tinted glories and generally sorted out the young Kerry man’s noodle. Galvin recovered to earn the accolade of footballer of the year the following season and paid tribute to that educational day spent in hurling’s idyll.

As the Kingdom habitually go about putting other football counties to the sword and Kilkenny march on as hurling’s standard-bearers, there is a distinct sense that they quietly approve of one another.

Kerry people can’t win when it comes to winning. If they come out beforehand and simply declare that they expect their team to win it all, they are left open to the accusation of arrogance. If they stay quiet and announce an All-Ireland win as special because it was unexpected – as happened this September – then the rest of us can gleefully hammer them for their smugness, for the way they compare and contrast their many wins, like a wine snob conducting a tour of his cellar.

Kilkenny, meanwhile, have made an extraordinary acquisition in the historical stakes through the Cody era, shooting light years past Tipperary and now just two behind Kerry’s total number of All-Irelands won. In the hours after their win last Sunday, Richie Power said Henry Shefflin’s bid for 10 medals was never mentioned in the Kilkenny dressing room.

You can be sure it wasn’t. There was no need: everyone knew it. And besides, any emphasis on the individual would have been against the Kilkenny ethos. To the rest of us, Kerry and Kilkenny are the one per cent. Because of that, they understand each other.

Adding to the historical total helps to create a sense of continuity and. What can the Kilkenny team of 2014 – free to indulge in a few days of letting off steam before they pick up sticks again for their clubs – possibly have in common with Icy Lanigan and the crew of serial Kilkenny All-Ireland winners from the decade before World War One? Nothing except that they are of Kilkenny: they lined out for the county and won the day.

When Cody took over as Kilkenny boss , Kerry had won 31 All-Irelands to the Cats’ 25. The Kingdom were out on their own. Now, it is possible that Kilkenny could become the most successful GAA county in the history of the association in a mere three seasons’ time. You can bet they have their eye on that. And the most ominous statistics concerning Kerry and Kilkenny are not the titles they won. Kerry have also finished runners-up on 21 All-Ireland final days and Kilkenny on 25. Just imagine how many they might have won by now.

The word revolution been bandied about in GAA circles in recent years. Hurling has seen several popular revolts and yet, when the dust settles, Kilkenny still seem to win. Kerry, too, have remained steadfast and calm through several distinct years of upheaval, from the Ulster renaissance to the flourishing of Cork to the emergence of strategically impeccable football. And still they keep winning.

The fact that both counties finished on top of the heap this season leaves all other football and hurling strongholds feeling quietly duped and probably in a fog of despair. If this pattern continues, then the All-Ireland hurling and football championships are much like the old truism about the Vegas casinos: the house always wins.

At around 7pm last Saturday evening, Tipperary manager Eamonn O’Shea gave one of the great Irish sporting valedictories. They should stick it on the Leaving Certificate course but the printed word could never do it justice; you need to hear the words as they were spoken.

He was composed but it was plain that the emotion of the match and the crushing disappointment was still flooding through his veins. He spoke with moving honesty about the team and his players as people, rationalising defeat even as he absorbed its pain and daring to admit the one thing that he couldn’t admit during the season: that for him, the game of hurling exists on a slightly higher plane than the mere result.

“I do think that there are more important things and there are men down there who . . . didn’t flinch when things didn’t go their way and yet the team kept going. That is my understanding of sport. But when Tipp play now, we keep playing until it is no longer possible.”

Should he, in the interests of decorum and all that, have kept his counsel on Monday? Probably. But could he, in his own mind, do that? Clearly not.

It takes some nerve to win the Walsh Cup, the National League, the Leinster and All-Ireland Championship and then emerge from the victory banquet filled with a sense of grievance. It means Kilkenny depart the year as they entered it: with an edge. It must leave other counties slightly spooked, as if they weren’t already.

Cody and O’Shea are both hypnotised by hurling but in very different ways. For Cody, those few seconds after the final whistle goes on All-Ireland final day and Kilkenny have won become the elixir to which nothing can compare. It is, perhaps, inadvertent: there is no way he could have planned on winning 10 All-Irelands when he first set out. For all the talk about revolution, it is Kilkenny, the establishment county, who have brought about the only meaningful revolution. They have turned history upside down during the tenure of one manager. They have joined Kerry at an altitude which is dizzying and unfathomable to the other counties.

Some day, Cody won’t be on the sideline. Some day, Eamonn Fitzmaurice and his generation will exit the Kerry dressing room for the last time. And new faces will come along, trying to emulate and better the achievements of this and all previous winning years. And so the clock ticks.

Envoi Allen continues relentless march at Punchestown 13:30
England need 36 to win as bad light halts play in Sri Lanka 13:04
Bríd Stack hospitalised after injury in AFLW pre-season friendly 11:28
India rearguard frustrates Australia and leaves series in the balance 11:19
Brendan Steele takes the lead at Sony Open with a round of 61 11:10