Just how Irish was Muhammad Ali? 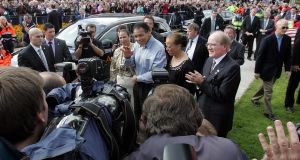 Muhammad Ali waves to photographers during his visit to Ennis in 2009. Photo: Donall Farmer/Inpho

Harrison Forde, Walt Disney, Kurt Cobain, even Barack Obama. If there’s one thing the Irish are good at, it’s laying claim to famous people. It doesn’t matter how far you have to go back through family lineage, if there’s even a hint of an Irish root there, it will be found.

On Friday, the great big Irish family (which is estimated to be at 70 million around the world) lost the greatest of them all.

Given the culture of top class boxing in Ireland it’s probably no surprise that the best ever to step foot in a ring came from Irish stock.

In 2009 the three-time heavyweight champion of the world was greeted with a civic reception in the Co Clare town to commemorate the fact that his great grandfather - Abe Grady - came from Ennis.

After living on Turnpike Road, Grady emigrated to the United States in the 1860s where he made his home in Kentucky and married an African-American woman who had been freed from a life of slavery.

Grady’s wife would later give birth to a daughter - Odessa Lee. She then met and married Cassius Clay Sr and on January 17, 1942, Cassius junior was born. He was named both after his father and also after a famous Kentucky abolitionist.

Historian Dick Eastman traced Ali’s roots back to Grady and the woman he married.

In an article published some years ago Eastman wrote: “An 1855 land survey of Ennis, a town in county Clare, Ireland, contains a reference to John Grady, who was renting a house in Turnpike Road in the centre of the town. His rent payment was fifteen shillings a month. A few years later, his son Abe Grady emigrated to the United States. He settled in Kentucky.”

However, in the last few years those Irish roots have become somewhat disputed. In a guide written by local historian Seán Spellissy, he states that Abe Grady was born in Kentucky and not Ennis as widely held.

He confirmed that a birth-cert for Abe Grady dating from 1865 has been located in Kentucky. However, this new evidence “doesn’t dilute Ali’s claims to be an O’Grady. His links to Clare are also quite solid. For Ennis, they are tenuous enough, but they have certain validity to Crusheen.”

Unsurprisingly Ennis Town Council was quick to comment, telling Spellissy to “put up or shut up.”

Shortly after, Ali paid a visit to Ennis where he unveiled a plaque outside his great-grandfather’s house before becoming the first freeman of the town in its 150,000 year existence.