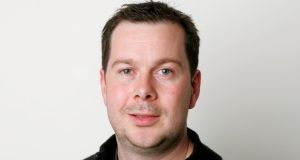 Irish Times sports journalist Carl O’Malley, who passed away suddenly on Thursday at the age of 36

To the utter shock and deep sadness of all who knew him, Irish Times sports journalist Carl O’Malley died suddenly on Thursday night.

He became ill during a soccer game and was taken by ambulance to St Vincent’s Hospital where he passed away at the age of 36.

The tragedy is deepened by the fact that he was on paternity leave this week and leaves behind his wife Moira and their three young children Charlie (6), Arwen (3) and Leo (seven days).

Carl was one of the first online sports journalists in Ireland, starting off in ireland.com in 2000 while still completing his journalism degree in Griffith College.

In almost 15 years of working for the company, he was a relentless driver of sport online as well as featuring regularly in the newspaper.

“Carl was a key figure in The Irish Times sports department,” said sports editor Malachy Logan. “His instinct for a story, writing ability and technical knowledge were key components for The Irish Times as it developed its sports coverage in print and online.

“His first love was soccer, whether playing, reporting or cheering on Liverpool. That love was matched by in-depth knowledge of the game which was a huge asset in the paper’s coverage of the sport, particularly the Euro 2012 finals and last year’s World Cup.

“An outstanding colleague, his loss is such a shock. He will be so badly missed by everyone in the paper.”

Carl specialised in soccer writing, covering Euro 2012 on the ground in Poland and masterminding The Irish Times’ 2014 World Cup online coverage from the office.

He stewarded the live blogs of Ireland soccer and rugby internationals that have become among the most-read sports items on the website. He was doggedly innovative when it came to finding different ways to present information online across a huge variety of sports.

A minute’s silence was observed in his memory at the launch of the Airtricity League season at the Aviva Stadium yesterday morning.

Reposing on Sunday and Monday at Fanagans funeral home on Aungier Street, Carl’s removal will take place on Tuesday next to the Church of the Holy Spirit, Kimmage Manor, Whitehall Road (East) for funeral mass at 10am, followed by cremation in Mount Jerome.

1 Seán O’Brien: Anger over my parents’ break-up never left me
2 Madness or defiance? The GAA is taking a huge gamble in staging Championships
3 All in the Game: Klopp’s Amsterdam subs don’t go down well
4 Will Connors chops his way to the front of Ireland’s openside queue
5 Gibson-Park, Earls and Kelleher all in race to make Ireland’s French finale
Real news has value SUBSCRIBE
Here is your handy guide to sport on television this week