Shane Lowry: To be honest, myself personally, I would have found it hard to finish 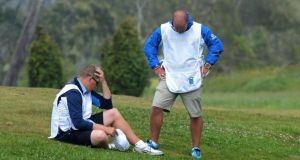 There are some big names here at the PGA Catalunya for the Spanish Open, always one of the most popular events on the European Tour. However, most of the talk is about a man who isn’t here, Ian McGregor, the caddie who tragically died when doing his job last Sunday in the Madeira Island Open.

A lot of the talk, in the locker room and on the range, between players and caddies, is about whether last week’s tournament should have been abandoned after the tragedy or whether it should have resumed as it did after the suspension in play.

People have different opinions on what happened. It is the talk of the place here. Some believe it should have been stopped; others are saying that Ian would have preferred that it was finished, like it was.

I wasn’t in Madeira. In fact, I was in Cobh – hitting some putts on a crazy golf layout on a cruise ship promoting next month’s Irish Open at Fota Island – last Sunday afternoon when Ian died. The news spread quickly about what had happened and I was shocked. I knew Ian well enough. I see players and caddies as being colleagues on tour, all part of the one family.

To be honest, myself personally, I would have found it hard to finish. I’d have walked off the course. I know a handful of players decided not to play on.

Peter Lawrie was one of them and I would have taken a similar view that the tournament should not have gone on. I mean, after the tournament resumed, people were walking past where he had just died. It was not very respectful in my opinion.

Mac’s death will be in the back of all our minds this week in Spain and I am sure for some time to come. I am sure his passing will be marked in some way this week and that tour players will put some structures in place to support his family.

Terrible weather
I arrived in Girona on Tuesday to some absolutely terrible weather which, ironically, made me feel good. You see, I was originally due to get a plane out of Dublin airport on Monday evening but was delayed getting back from my media and promotional duties in Cork and had to reschedule my flights to Tuesday morning, which meant a 4am alarm call.

The weather meant that my late arrival didn’t impact on my preparations as I wouldn’t have been able to play any golf on Tuesday morning anyway. I got nine holes in on Tuesday evening – playing with Damien McGrane and Simon Thornton – and the old expression of a course fitting your eye immediately came to mind.

The PGA Catalunya is one of the nicest courses I’ve played in a while. Really good, really demanding. You stand up and hit driver on almost every hole, you have to think your way around and the greens are tricky, quite undulating and quick. It’s a good test, with lots of rough around the greens. It is always good to get out on a good golf course and one you feel comfortable on.

My results haven’t been good so far this year. Nobody needs to remind me of that. I have my coach Neil Manchip out with me for the next two weeks, here in Spain and at next week’s BMW PGA Championship at Wentworth, and that always helps when he is around. I’m looking forward to getting stuck into it the next few weeks and to turn this bad form around.

I was playing a practice round with Graeme Storm a few weeks back in Malaysia and I was hitting the ball so well that he turned to his caddie and said: “He’s going to win soon.” I feel that I am going to run into good form and playing eight of the next nine weeks is really what I need.

Momentum going
My season so far has been so stop-start and missing most cuts by a shot has meant it has been hard to get momentum going. I want to get my mojo back again. I know I will hit a vein of good form soon. I just have to keep playing my way through my bad spell and keep plugging away. That is all I can do really.

These are big tournaments the next few weeks. I was actually in a similar position with my form going to Wentworth last year as I am now, looking for a spark. I was out injured for a couple of months and I’d only a few tournaments before it.

When I got to Wentworth, I felt a new energy. I think I was tied for the lead with six holes to play or something like that. It’s somewhere I feel I can play well.

I feel I can do well any week, no matter what the course, no matter where it is. I just have to try and find that bit of form from somewhere.

I remember back in 2011, out early on the Saturday playing with Rory McIlroy and then finished with a 67 when playing alongside Edoardo Molinari that lifted me up to a tied-fourth finish.

That was a round at Wentworth that opened my eyes and gave me great belief in my own ability. Edoardo had played the Ryder Cup the year before and I completely outplayed him. Dermot, my caddie, said to me after the round: “See?”, basically saying, “you’re good enough to compete with the best of them.”

I believe I am. I hope the next few weeks show that.

1 Diego Maradona dies of heart attack, aged 60
2 Keith Duggan: Through the glories and the disgraces, we were all Maradona addicts
3 Andy Farrell to delve deeper into Irish squad for team to play Georgia
4 Gordon D'Arcy: I know what Joe and Cheika would do. Fix the basics
5 Diego Maradona: Five memorable moments
Real news has value SUBSCRIBE

Tyrone announce Brian Dooher and Feargal Lohan as joint managers 22:07
Diego Maradona: Five memorable moments 21:16
Keith Duggan: Through the glories and the disgraces, we were all Maradona addicts 20:30
Manchester City cruise into last 16 with win in Greece 20:29
Rapid Vienna v Dundalk preview 20:27
Here is your handy guide to sport on television this week