Shane Lowry: I’m thrilled to be here but I’m annoyed with USGA draw of pairing three big guys together

What they did is making a mockery of us 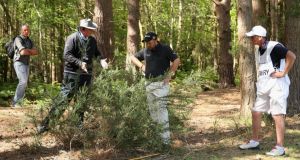 Ireland’s Shane Lowry finds trouble on the 13th during the final round of the BMW PGA Championship at Wentworth where he finished runner-up.

You see the bronze statues near the back of the18th green, beside the clubhouse. Of an old Donald Ross, standing and forever waiting. Of Payne Stewart, his fist frozen in midair and his leg raised. There’s something special about Pinehurst and I’m thrilled to be here, thrilled to be playing in the US Open and thrilled to have played my way into the championship the way I did. I know I am playing well. It’s a great feeling.

To be honest, I am also annoyed about something.

I don’t mind saying it, but I think it is a bit cheeky of the USGA in making the draw the way they did. I’m with Brendon de Jonge and Kevin Stadler for the first two rounds. Someone’s bright idea!! Put the three big guys together!! I think it is unfair on the three of us. It is definitely not drawn out of the hat, that’s for sure. And I just hope we don’t get stick from the galleries.

What they did is making a mockery of the three of us. I spoke to Graeme McDowell, and he thinks I should say something to the USGA about it.

I’ve always had a bit of extra weight. I have worked on my fitness, but people don’t always see that. I am my own fella and the important thing to me is that all my friends and family know exactly what I do and how hard I work for my career and how passionate I am about golf and doing as good as I can.

At the end of the day, you don’t have to be 75 kilos or 80 kilos and built like a tank to do well at this game.

This is a big week, the second Major of the season and the first for me and I am genuinely excited about playing in the US Open and especially at Pinehurst. I loved the place as soon as I got here on Sunday afternoon.

We took a taxi down US Highway 1 for the two hours or so drive to our rented house in Pinehurst village. I was a bit tired from the flight over, didn’t get much sleep, so the plan to play nine holes was shelved. It was a good move. We were able to settle into the house, right in the village. Perfect.

We’ve our own chef in this week. Byron. From Orlando. He’s good. He’s done a bit with G-Mac and the other lads in the past and I said to Conor Ridge about getting a chef for the week. It’s a nice break away from hotel life. He rang him. He was free. It’s much better to get healthier meals prepared in the house than having to go out to restaurants.

You always wake up early the morning after travelling over to the US. I was up at 5am but Byron was already there, cooking breakfast. It was a great way to start the day . . . then, on getting to the course, you’re handed the keys to a Lexus with less than 20 miles on it. It’s my car for the week. The house is only a kilometre away. There won’t be many miles clocked up by the end of the week. But that’s an indication of how well we’re looked after at these championships.

I’ve a great group with me this week. My dad Brendan. He’s walking around, and I don’t think I’ve ever seen him as giddy or happy. My coach, Neil Manchip. The three lads from Horizon, Conor, Colin and Keiron. My friend, Darragh Fanning. He was at the British Open last year and he feels this is even bigger.

I was in bed by 9pm on Monday night and needed the alarm call to wake me up on Tuesday, which is a good sign. It means I’ve acclimatised to the time difference. I was out early – a 7.07am tee time – with Graeme McDowell and Aaron Baddeley. We talked about the course. There were comparisons made with Australian sandbelt courses. Royal Melbourne. Kingston Heath. I must say it was great to listen to G-Mac and his caddie Kenny Comboy about how to tackle the course. We have all come to the conclusion it is going to be an absolute battle out there. Very tough. It’s about trying to keep your head on all week, trying to be mentally there.

I feel I can do well. I love tough golf. I love the challenge of going out and making par. I feel that’s my game where I am best suited.

You know what you are going to get with the USGA. It is the toughest examination in golf. I made my US Open debut at Congressional in 2011 but the course there was soft after so much rain. It wasn’t what you expect from a traditional US Open set-up. I remember hitting a five-iron from rough and making the green. That kind of thing. The rough wasn’t penal. So, this is the first real tough test of a US Open I am going to get.

I have the fact that I am a really decent chipper going for me on this course. Unless it’s absolutely dead, you feel you can get up and down. When my head is on and my mental game is there, that’s when I am at my best because, if I hit a bad shot, I can get on with it.

There is something to be said about coming to a new golf course. I obviously wasn’t here in 2005. I don’t even know what the golf course used to be like. I saw pictures on the ‘Golf Channel’ the other night and couldn’t believe it was the same golf course. But it’s like going back to Wentworth. The first time I went there was the year of the West Course redesign and everyone was giving out about it. I was there saying, “What’s wrong with it? This is the golf course.” It’s the same here. You play the course.

I definitely expect to play four rounds. I feel if I can get through the first two rounds, not far away, anything can happen over the weekend. It’s just about hanging in there. I am hopeful and prepared. I am not going out hoping to play well. I know my game is good.