Shane Lowry: Difficulty of winning on tour hard to exaggerate 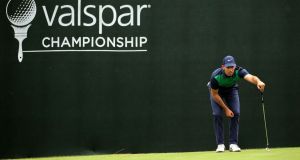 Charl Schwartzel won the Valspar Championship. “Seeing Charl win was actually encouraging because it showed that any player is only one week away from winning.” Photo: Sam Greenwood/Getty Images

If I tell you that my list of sports viewing inside the past week has included the Ireland-Italy rugby match on Saturday, the Offaly-Clare football league match on Sunday and the Barcelona-Arsenal Champions League game in the Camp Nou (a very nice Christmas present), then you’ll understand that my mind isn’t always thinking about hitting a little white ball an exact distance to a fluttering flag.

In truth, it is great to be able to get out and about and to experience other sports. Even watching Aidan O’Shea swapping places to play American Football in that documentary on RTÉ the other night gave me a chance to appreciate other sportspeople and what life is like for them.

After a run of five tournaments in six weeks, the past couple of weeks gave me time to relax and to put my feet up. It wasn’t all downtime. There were a couple of sessions with my fitness expert Robbie Cannon out in Santry and a couple of rounds of golf, one of them the other day at the outing organised by Damien McGrane in Carton House where some of our up-and-coming young players got the chance to play and to pick our brains about what life is all about out on tour. Hopefully Brian Casey and David Carey learnt something from me!

The bottom line about teeing up in any tournament is what Tiger calls the “W” – and, for any player, it is all about winning. Winning is easier said than done of course, and anyone going out on tour must understand how difficult it is to win, be it on the PGA European Tour or the PGA Tour or anywhere.

I was watching the golf from America on television on Sunday night and again that point of how hard it is to win was again brought home to me. You have to play your best golf to win, and Charl Schwartzel deserved his success just as Adam Scott the previous two weeks and Bubba Watson before him deserved theirs. There are really a lot of good golfers players playing really great golf at the moment.

Seeing Charl win was actually encouraging because it showed that any player is only one week away from winning: it is all about getting into contention as much as you can and some days you will do enough to get the job done. Some days someone else will do better, some days it will be your turn. You have to keep getting into position.

I had considered trying to visit Augusta ahead of the Masters but logistically it just doesn’t work so I won’t get there until the Sunday night. I am focusing on taking things week by week, so I will see how I get on in Austin next week and go on to Houston and try and play well there. First and foremost, it is about the matchplay and I will see who I get in my group come Monday.

I would be a fan of going straight into the matchplay and playing straight knockout from Wednesday. I suppose the idea of the group stages keeps it interesting for a longer period. You still have to win your first three matches to get out of the group. You can win two and still get knocked out, so the best thing to do is to focus on winning every match.