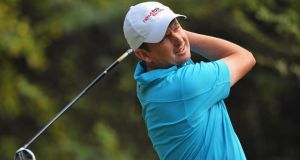 Peter Lawrie: shot a 67 to lie four shots off the lead at the halfway stage of the Italian Open. Photograph: Stuart Franklin/Getty Images

Sweden’s Jens Fahrbring is the surprise joint leader with Denmark’s Lucas Bjerregaard at the halfway lead in the Italian Open in Monza.

Peter Lawrie shot a 67 to lie four shots off the lead, while three other Irish players – Darren Clarke, Paul McGinley and Padraig Harrington – all made the cut and are on four under after 36 holes.

Fahrbring won the D+D Real Czech Challenge in May on the Challenge Tour but had missed the cut in all four of his European Tour events so far this year.

But despite not feeling 100 per cent, the world number 302 fired nine birdies and one bogey in a second round of 64 to join Bjerregaard, who shot 65, on top of the leaderboard on 13 under par.

“I am quite surprised where I am because I was not well at the start of this week,” the 31-year-old said. “I picked up a cold and a fever last week in Kazakhstan, so yesterday was a struggle and I didn’t expect to play so well.

Overnight leader Nicolas Colsaerts could only add a 70 to his opening 63 to lie two shots off the pace alongside Spain’s Pedro Oriol, France’s Romain Wattel and Paraguay’s Fabrizio Zanotti. Two-time major winner Martin Kaymer was part of a five-strong group another stroke back on 10 under, the former world number one firing five birdies and an eagle in his 66.