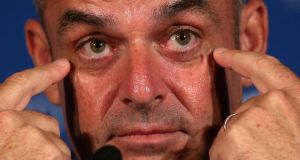 European Ryder Cup captain Paul McGinley at the official announcement of Stephen Gallacher of Scotland and Ian Poulter and Lee Westwood of England as his three captain’s picks for the Ryder Cup at Gleneagles at Wentworth yesterday. Photograph: Andrew Redington/Getty Images

In the ballroom of the Wentworth Club in the stockbroker belt beyond the big smoke, Paul McGinley yesterday delivered his three wild card picks.

One of them wasn’t Luke Donald, and it was to him – the toughest phone call of them all – that McGinley first broke the news that Stephen Gallacher, Ian Poulter and Lee Westwood would be added to the nine automatic qualifiers for the European Ryder Cup team at Gleneagles on September 26th-28th.

And, yet, it is the very fact someone like Donald, a former world number one, can be discarded that perhaps explains why McGinley will lead a team regarded as the strongest ever to represent the continent into the fray.

As things stand, Europe will head into this 40th Ryder Cup with four players from the top-five in the official world rankings. Surely, that must mean something.

As McGinley observed, “I know Jim Gavin and he will have prepared that Dublin team incredibly well, incredibly strongly.

“He would have had a very strong strategy as well too . . . going out such heavy favourites, and they still get beaten.

“That is what happens at the top level. Sometimes it just goes against you and I am aware that could happen to this European team too.”

He added: “My job is to lessen the odds of that happening and to have the team prepared mentally and physically.

McGinley – who later this week will add further vice-captains to his backroom team of Des Smyth and Sam Torrance, possibly as many as another three, with Miguel Angel Jimenez and Pádraig Harrington among those conjectured to be brought on board – announced his three captain’s picks in the ballroom of the Wentworth Club where the walls feature old artwork in gold frames.

On Monday night, he had made the hard calls (to Donald and Francesco Molinari) informing them why they had missed out; and the happier calls (to Gallacher, Poulter and Westwood) on their inclusions.

The decision to pick Westwood ahead of Donald was, it would seem, the hardest of all.

“It was a very close call,” conceded McGinley, especially given his association with Donald going back to the Englishman’s debut in the Ryder Cup at Oakland Hills in 2004. There, McGinley was the old hand to steer young rookies.

There, they became soldiers in arms.

In making that call to Donald, who had just finished the final round of the Deutsche Bank championship, McGinley related the disappointment that came back across the Atlantic on the telephone but which ended with the Englishman saying, “You know, Paul, I publicly backed you to be captain. Even though you have not picked me, I still believe you’ll be a great captain . . . . Go Europe!”

“Ultimately that’s what it came down to, that’s how close it was. The fact there were some mid-60s form there . . . I told him through the media that I needed to see some form, that he wasn’t going to get in on past form alone, and he stepped up to the plate and produced.

“Luke played very well and very consistently but he didn’t have those green shoots of real form that I saw from Lee and that was the short head that decided it.”

It was nevertheless a decision that was met with understandable disappointment from Donald and with criticism from a former captain Nick Faldo, who tweeted: “If Lee and Luke were a tied pick for me, I would have picked Luke. Fab short game under pressure in probably rough weather.”

McGinley is unlikely to be too worried about what Faldo’s thoughts on the matter are, although he will be contacting another former captain – Bernhard Langer – to pick his brains about preparing for the match ahead. It is all part of the meticulous nature of McGinley’s planning. No stone left unturned. Captaincy, McGinley’s way.