Marc Leishman opts out of Olympics over Zika virus fears 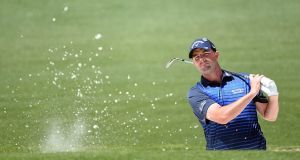 Marc Leishman will not represent Australia at the Rio Olympics. Photograph: Getty

Australia’s Marc Leishman has become the latest player to announce his intention not to compete in the Olympics, citing concerns over the Zika virus.

Leishman’s wife Audrey almost died from toxic shock syndrome last year and the world number 35 has decided he can not risk making the trip to Rio.

“Last April my children and I almost lost my wife Audrey to toxic shock syndrome. Since then Audrey has been prone to infection and is far removed from 100 per cent recovery of her immune system,” Leishman said in a statement.

“We have consulted with Audrey’s physician and due to her ongoing recovery and potential risks associated with the transmission of the Zika virus it was a difficult yet easy decision not to participate.

“I missed playing in the 2015 Masters tournament to be at her side when she was originally stricken and I cannot risk placing her health in jeopardy.”

Leishman, who lost out in a play-off for the Open at St Andrews last year, joins fellow Australian Adam Scott, South Africa’s Louis Oosthuizen and Charl Schwartzel and Fiji’s Vijay Singh in opting out of the Games in Rio, where golf is included in the programme for the first time since 1904.

Scott had previously said winning an Olympic medal was nothing he had ”ever aspired to do” and questioned the 72-hole strokeplay format for what he called ”an exhibition event,” while Oosthuizen cited “family and schedule issues” and Singh also expressed concern about the Zika virus.

PGA of Australia chief executive officer, Brian Thorburn said: “Marc didn’t make his decision without a great deal of thought. Yes, it is very disappointing he won’t be representing Australia in Rio, but we respect his decision to make Audrey’s health and well-being his number one priority.

“To be in a position where you have to withdraw from the Masters and the Olympics, the two most significant tournaments a professional can be invited to, all within the space of 12 months, is not a decision made in haste.”

1 A kick in the teeth for sports, and a nail in the coffin for communities
2 Born to ride, born to win: Sam Bennett, the making of a green machine
3 West Ham boss David Moyes tests positive for coronavirus ahead of Hull game
4 Sam Bennett hoping Tour de France success does not bring celebrity status
5 Awarding of 2023 Rugby World Cup to France part of Laporte investigation
Real news has value SUBSCRIBE