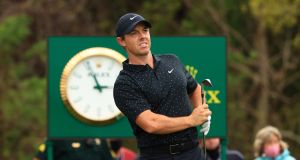 Rory McIlroy in action at the Arnold Palmer Invitational. “I don’t know what the word is or how to describe it, but [I’m] just a little bit dejected. I don’t know, like, maybe looking to go in a different direction.” Photograph: Mike Ehrmann/Getty Images

It’s not a slump, not even a mini-slump, by anybody else’s metrics, but the level of expectations surrounding Rory McIlroy are set a lot higher than most, which is why he spoke of dejection and possible changes of direction on leaving Bay Hill as he made the short road trip on to Ponte Vedre for this week’s Players Championship at Sawgrass.

In his six starts so far this year, McIlroy has managed three top-10s along with two top-20s and a (rare) missed cut. The problem, as the player himself has perceived it, is that he doesn’t know from one day to the next which game he will bring to the golf course.

Somewhere along the way, a speed bump has materialised to slow his progress and make him unsure of where he is headed.

“ I don’t know. I need something. I need a spark. I need something and I just don’t seem to have it. Some days it’s good, some days it’s not,” said McIlroy after the Arnold Palmer Invitational where, not for the first time this year, he was unable to make any impact on contending for a title when the chips were down.

McIlroy arrived at Sawgrass – where he won The Players in 2019, his defence a year ago cut short when the impact of Covid-19 caused the tournament to be abandoned after one round – with the intention to “get some practice in” and hope that, perhaps, a return to the Pete Dye-designed layout will provide that spark he has been searching for.

It has taken time for McIlroy to fall in love with Sawgrass. In his initial dealings, it was a course that flummoxed him. He missed the cut on the first three times he played in the Players – in 2009, 2010 and 2012 – but finally managed a top-10 in 2013 and that seemed to spark, if you will, a new found appreciation for the course which ultimately led to a win in 2019.

With a limited crowd allowed on-site for this week’s tournament, McIlroy said : “I think we’re all now seeing a light at the end of the tunnel where things can at least get back to some sort of normality pretty soon.”

McIlroy is not the only Irish player looking for an upturn in fortunes. Shane Lowry is aiming to rebound after a missed cut in the Arnold Palmer at Bay Hill, while Graeme McDowell – down to 110th in the world rankings – has missed the cut in three of his four outings so far this year.

With Brooks Koepka ruled out of the Players because of another knee injury, and Matthew Wolff, who withdrew from the recent WGC-Workday, opting not to include the tournament on his schedule, it means that 48 of the current top-50 on the world rankings will be in action.

This week’s Commercial Bank Qatar Masters offers rank-and-file players on the European Tour an opportunity to get playing again. The tournament in Qatar kickstarts a three-week stretch, that also takes in back-to-back tournaments in Kenya in the next number of weeks.

Cormac Sharvin, who showed a return to form with a tied-21st finish in the Saudi International in early-February on his last competitive appearance, is joined by Jonny Caldwell and Paul Dunne in the field for the Qatar Masters in Doha. The three players spent last week in Dubai, managing some warm weather practice ahead of the three-week stint.

French Olympic president says athletes should ‘pass’ ahead of others for vaccinations 18:06
Rob Baxter believes Lions stance on Premiership player release is ‘disingenuous’ 17:52
RBC Heritage lowdown: Johnson looking to bounce back from missed cut at Masters 17:36
Austrian Open lowdown: Luiten looks a likely lad on course he loves 17:23
Simone Biles: ‘I’m not a little girl anymore, I feel like I’ve really found my voice’ 16:18
Here is your handy guide to sport on television this week