Northern Ireland golfer one clear of the field after opening round 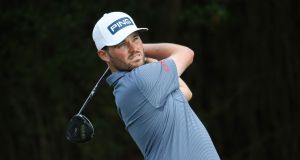 Cormac Sharvin drives on the fifth hole during the opening round of the English Championship at Hanbury Manor in Ware, England. Photograph: Warren Little/Getty Images

Cormac Sharvin was the surprise leader after he carded an eight-under-par 63 to take the first-round lead at the English Championship in Hertfordshire.

The 27-year-old Northern Irishman, who teed off in the final group of the opening round at Hanbury Manor, carded 10 birdies and two bogeys to nudge ahead of six players in a tie for second at seven under.

“It was a nice round, played really well, didn’t do too much wrong,” Sharvin said.

“Put it on the fairway, hit a lot of good shots and holed a few putts as well and it all added up to 63. Pretty happy to start well.

“A long way to go but it’s always nice to shoot a good score on the first day and not put yourself out of it.”

Veteran David Howell rolled back the years and looked to have earned his first 18-hole lead at a European Tour event in his 636th appearance as he registered six birdies and a stunning hole-out at the 15th to move to eight under.

Sharvin opened up with three birdies in Ware before dropping a shot at the fifth. He replied by recording gains at the seventh and ninth to get to the turn at four under.

Sharvin, ranked 322nd in the world, picked up successive birdies from the 11th hole to move within one of the lead, only to drop a shot at the next.

Consecutive birdies at the 14th and 15th increased the group at the top to seven players before he rolled in his third successive gain to take the outright lead.

Paul Dunne opened with a one-under 70, while Jonathan Caldwell’s one-over 72 left him well down the field.

Britain and Ireland unless stated , par 71

Wexford’s Joe O’Connor ready to pick up where he left off 01:00
Liverpool maintain perfect start with win over Arsenal 22:12
Hourihane gives Kenny a nudge as Aston Villa sweep past Fulham 20:05
Rafael Nadal up and running as he bids for 13th French Open title 20:23
Positive omens for Kenny ahead of Ireland’s Slovakia clash 22:09
Here is your handy guide to sport on television this week