Seán Moran: Provision of free televised games not a priority for the GAA 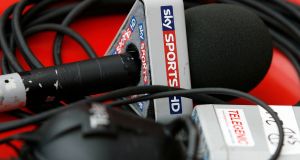 Even before the Sky deal, the number of live broadcasts was reduced by 10 because of the impact they were having on attendances at local club fixtures. Photographer: Simon Bellis/Bloomberg

The report of the McNamee Commission in 1971 contained the GAA’s first detailed public consideration of the role of media, especially broadcast, in Gaelic games.

Among the recommendations were that live coverage of All-Ireland semi-finals be terminated because of the impact it was judged to be having on attendances, leaving the All-Ireland and Railway Cup finals as the only live broadcasts in a year.

This echoed a Roscommon motion that had gone to Annual Congress in 1967. It was defeated but only after an intervention by Monaghan delegate Michael Duffy, who pointed out that at previous congresses there had been complaints that RTÉ didn’t cover enough matches; therefore it made no sense to reduce the existing schedules.

Duffy – father of the current GAA director general – was credited in these pages by Paddy Downey as, “probably the decisive argument in mustering the majority that defeated the motion”.

Another recommendation in McNamee was the establishment of “a special negotiating team to consult with RTÉ on all radio and television matters affecting the association”.

Were such a body in existence, it would be having a lively week after RTÉ broadcast Sunday’s broadside from hurling pundit Michael Duignan aimed at the GAA and its broadcasting rights policy.

The frequently overwrought arguments on the merits or otherwise of the Sky deal have been well aired in the three years since the first deal was done and again seven months ago when it was renewed so it was surprising to hear the subject resurfacing – let alone in the shape of an attack by one rights holder on another.

As can be seen from the above reference to the McNamee report, the GAA has always been of the opinion that broadcasting rights are an instrument rather than an end in themselves. Broadly, association policy prioritises participation in and attendance at the games.

Broadcasting rights facilitate this in a number of ways: promotion of the games and revenue generation. Striking a balance between these two aspects is not easy. Commercial arrangements with subscription broadcasters obviously shrink the available audience but they generate more income, through the deals themselves and in maintaining the integrity of the market.

In his annual report to the 2016 Annual Congress, Páraic Duffy spelled this out when explaining why he was opposed to a Dublin motion to end exclusive rights for subscription broadcasters.

“However, any restriction that prohibits the GAA from engaging with all interested parties, including subscription TV providers, would seriously reduce our negotiating power and thus our ability to achieve the true worth of our assets, and would inevitably lead to a greatly reduced media-rights income.”

The motion was debated and defeated, securing only 15 per cent of the vote.

At an organisational level the GAA clearly does not see its basic aim of “strengthening the national identity in a 32-county Ireland through the preservation and promotion of Gaelic games and pastimes” as entailing the provision of free television.

For instance even before the Sky deal, the number of live broadcasts was reduced by 10 because of the impact they were having on attendances at local club fixtures.

Serendipitously, Sky has been the broadcaster for two of this championship’s great controversies: Diarmuid Connolly’s push on linesman Ciarán Branagan and Brian Cody’s push on Justin Heffernan, the fourth official in Thurles on Saturday evening.

Unwittingly, Duignan created more awkward problems for Croke Park with his dismissal of any case that the Kilkenny manager might have to answer for the latter incident.

The Central Competitions Control Committee and the GAA’s disciplinary apparatus labour under the persistent jibe that they simply react to what the pundits on The Sunday Game pronounce on the television.

As it turned out, Cody was given a clean bill of disciplinary health in the report of referee James Owens and that rules out any follow-up investigation by the CCCC. The fourth official was intervening to prevent a confrontation between the Kilkenny manager and his Waterford counterpart Derek McGrath and the view appears to be that it was Heffernan who initiated the contact and Cody dropped his hands quickly having pushed back.

From a public perspective, and especially Dublin’s given Connolly’s 12-week suspension for the infraction of ‘minor physical interference’ with a match official, this looks like inconsistent application of rules and the fact that The Sunday Game argued for it will be seen as further evidence of the influence of television.

Duignan’s assertions in Cody’s defence included saying, “he has the most respect for other teams, officials and players or any manager that’s ever been out there”.

The Kilkenny manager has led a charmed life in respect of controversies with referees. His confrontation with Diarmuid Kirwan during the qualifier with Galway in 2004 led to nothing more than a warning whereas three years ago the attack on Barry Kelly for the late free at the end of the drawn 2014 All-Ireland final, delivered a day after the replay, which was described as “criminal” also resulted in nothing more than another warning.

Actually, the incident also illustrates a separate issue: the difference between the football pundits, who tend to highlight foul play and their hurling counterparts, who do their best to minimise it.