Johnny Glynn feeling very much at home in New York 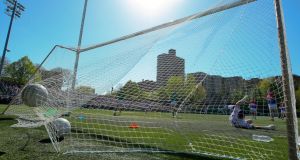 The New York skyline in the backround during a game at the Gaelic Grounds. Photograph: Ed Mulholland/Inpho 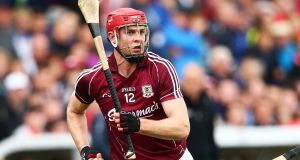 Jonathan Glynn in action for Galway last summer. “Lads might talk down New York but to be honest the talent here is unbelievable.” Photograph: Cathal Noonan/Inpho

Johnny Glynn, past-and-future Galway hurler, said he’d meet us on Randall’s Island. At 22, Glynn has already played in three All-Ireland hurling finals, but this summer his participation in the GAA championships is solely with the New York footballers, who face Roscommon on Sunday evening in the Connacht championship’s traditional early May opener.

It sounds like a prison, but Randall’s Island is actually a series of soccer pitches and sports facilities on the Hudson River.

As well as keeping himself busy with the New York seniors, he’s training the Sligo club team, and when we met him there two weeks ago the sun was setting on a beautiful New York evening.

The session could have been a GAA club team anywhere – not the cookie-cutter athletes of intercounty, rather a whole spectrum of body shapes adorned with the usual selection of out-of-date Manchester United jerseys, T-shirts from long-forgotten U2 tours, and former Sigerson players getting another wear out of their college jersey . . . but all played out within shouting distance of soccer games populated by Mexicans and Brazilians and Italians, with the Manhattan skyline providing its at-once familiar and outlandish backdrop.

But just what has him in the greatest city in the world, a long way from Ardrahan and the hurling summer? When the question is asked this week in Ireland, as the curtain is about to be raised on another championship, it might seem a valid query.

“I came out here for a holiday two years ago and I loved the place. I said if I ever get the chance to come out, I’ll take it . . . I’m only 22, and the last four or five years have been dedicated to hurling. I’ve enjoyed every bit of it, but -

“If you came up to Woodlawn where I live, it’s like walking down Shop Street in Galway! I’ve a brother here almost 4 years, and he had the foundations laid for me – I came out with my girlfriend Serena, I’ve an uncle here, friends, work has been great . . . if I was to walk away from that, I’d be walking away from a lot.”

He can count himself unlucky not to have won an All-star last year, but with four years of inter-county hurling already under his belt, there will be plenty of summers spent under the microscope as a Galway hurler.

So for now it appears Glynn has committed the cardinal GAA sin of behaving like a normal human being, and instead he’s embraced the rather different GAA culture of New York.

Training with the footballers has been going well, and if he offers up a rather humble appraisal of his own abilities – “I’ve two left feet on me, but I might be fit and I’ll just hand-pass the ball and get away with that maybe!” – he has nothing but praise for his new team-mates.

“Lads might talk down New York but to be honest the talent here is unbelievable. We are coming in without playing a competitive league game or championship game. Even if you look at us in Galway last year – our first [championship] game against Dublin we barely scraped a draw; if we’d lost that, would we have ended up in an All-Ireland final? You’re going to make mistakes the first day, and that’s probably where New York fall down, they don’t get a chance to make those mistakes.

And it’s not like football is completely alien to him. His home club of Ardrahan may not have much of an interest in the big ball, but he comes from a family steeped in the game in Caherlistrane, the very definition of a North Galway footballing stronghold.

As for his future with hurling, Glynn is refreshingly confused about it all.

“To think about it, it’d kill me not to go back. But I can’t do both – if I go back [to Ireland] I can’t come back here, and if I stay here I can’t hurl back there. It’s a hard one, between sleepless nights and thinking about it and phone calls home.

The words and body language suggest a man still torn over his decision to let the Galway train chug along without him this summer – and it would be a major surprise not to see him wearing maroon in 2017.

New York have another Galway man as their captain, Johnny Duane, who was one of their stand-out performers in the football championship last year.

And if expectations are a little lower this year than they have been in previous years, after a change of management and with a Division One team on the plane over, the story of New York’s participation continues to be one of those curious incongruities of GAA life that we might be better off good-naturedly accepting, rather than subjecting to too much investigation.

The wonder is not in deciding New York should compete in the Connacht championship every year – the wonder instead is in witnessing two Irish lads sprinting from the subway on 125th street in Harlem onto the M35 bus to Randall’s Island, racing to training after a day’s work in the city to play with their mates under the glistening lights of the RFK Triborough Bridge. Any encouragement we can give those lads along the way might just be worth it.