‘Championship is championship’ Waterford defender is wary of a Cork backlash 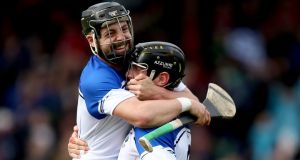 Time moves differently in the hurling life. Noel Connors is still just 24 but as the Waterford players celebrated on a damp afternoon in Thurles on Sunday, the Passage East man was happy to play the role of senior spokesman. He is one of the few players in the dressing room able to compare this new era of Deise hurling with the grand, romantic years which probably reached a crescendo when they beat Cork in that operatic extra-time replay Munster final five summers ago. Another damp evening in Thurles with Waterford delight as its musical score. All has changed since then, from the roll call of players since retired to the lush beard which the corner-back now sports.

“It is very difficult to compare anything,” Connors said on Sunday evening, generously standing in the hall outside the victors’ door even though his friends were already in full-on celebration mode inside.

“We are with a totally different bunch of players, backroom staff and mentors, particularly with growing up playing with a different cohort of players, including Dan. So it is hard to compare both but winning a national title is fantastic and it is something that I will look at the end of my career and say it was a fantastic weekend.”

O’Connors speaks like he plays: attentive, tidily and with composure. Sunday’s win left the Waterford squad in a strange place. Tradition dictates that teams aren’t really permitted to extrovertly celebrate the league and every utterance was followed by genuine caution about facing Cork again next month. But still: the turnaround of form and fortune achieved by this team is a remarkable story. You could see in their faces that they were all justifiably thrilled. Winning the third ever league title in Waterford’s history is no small beer. But more than that, there was the sense that their delight was based on what they have come through together.

“It’s probably only over half an hour or even less, but fantastic,” agreed Connors.

“Any time you win a national title it’s great, especially with a great bunch of young lads that really want to work hard for each other; and that have put so much effort in over the last few months, with a small bit of criticism from the offset. Derek probably took the brunt of that, but maybe that instilled a small bit of belief in us, because we wanted to kick on and prove to ourselves that we were there or thereabouts and competing with the top.”

If there was a minor surprise that Waterford completed a perfect league programme yesterday, the ease with which they contained Cork’s firepower was a bigger eye-opener. Waterford strolled home in the last five minutes, leaving Jimmy Barry Murphy to declare the day a set-back to Cork’s morale and a deep disappointment. The relative ease of their win understandably leaves Waterford feeling a little bit exposed and mindful of the mood with which Cork will take the field when the meet in the Munster championship on June 7th.

“Look, championship is championship and you’d be foolish to think what is happening today will have a massive bearing on it. Any day you go out and play a seventy minute game it is totally different. It is not as if I am going to slip in the same position or as if, we’ll say, the Brick will score in the same position. It is a totally irrelevant and if anyone thinks it is going to be the same is naive.”

Connors and the Waterford fullback line succeeded in frustrating Cork’s shimmering forward line. The most glaring chance came in the first half when his man Patrick Horgan supplied a brilliant concealed pass for Seamus Harnedy to carry through on goal. The only other goal chance was a brilliant, ambitious strike by Conor Lehane in the second half when Cork were fading. What was notable about that moment was that as Lehane struck, he had five Waterford defenders in his immediate path. That honesty of effort- and zealously safeguarding their measly goals conceded (five for the season) has been central to Waterford’s game plan. But work rate and energy has been at the heart of what they do and finishing the league. Connors shrugged at praise for keeping their goals to just five conceded.

But I suppose it’s something we’ve to address too; we let in five goals, so our aspiration for the championship is to concede no goals throughout the whole campaign. That’s something we can address in the coming weeks. It’s a relatively young team and you have inexperience to an extent, but then you have a few of the older lads that give great confidence and great advice to us. Definitely the winter has been fantastic, it’s been massive for us, and it’s probably brought a lot of us together and gelled us quite a bit.”

By winning the league, though, Waterford have made a declaration of sorts. Like it or not, they are going to be spoken of as the coming team and as contenders.

“Look it, it is something that any team that wants to be at the top of their game is going to have to take on the chin and relish it,” Connors pointed out,

“And not overanalyse it is one of the most fundamental aspects of it also. But yeah, it is good to be in the mix. We have been in transition for the last two, three years and it is time we kicked on and made ourselves more successful.”

1 Gerry Thornley: Changes to tackle laws could transform rugby by time of next World Cup
2 Sky Sports customers set to save on bills until Premier League returns
3 Jack Grealish needs to show that his remorse is real this time
4 ‘This is sick’ - seventh-tier Swedish club cancels friendly after betting mayhem
5 My favourite sporting moment: Phil Mickelson’s miracle shot at the 2010 Masters
Real news has value SUBSCRIBE