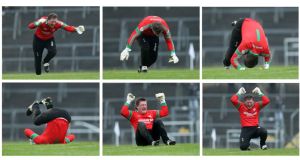 ST BRIGID’S 1-13 WESTERN GAELS 0-9: Reigning All-Ireland champions St Brigid’s held off the spirited challenge of a Western Gaels side bidding for their first title in an entertaining Roscommon SFC final at Hyde Park.

Once again Frankie Dolan, who scored the winning point when St Brigid’s became the first Roscommon side to win the All-Ireland club title earlier this year, was the hero for the Kiltoom side.

He shot 1-4 with his goal three minutes from time putting paid to another revival from the Frenchpark side who had reduced a five points deficit to a goal and were building towards a strong finish.

Senan Kilbride set up Dolan, who had earlier flashed an effort just off target, and he blasted to the net to secure St Brigid’s 13th Roscommon title and their fourth in a row.

Two points from midfielder Karol Mannion helped St Brigid’s lead by 0-7 to 0-6 at the interval after an exciting opening half.

Kevin Higgins and hard-working skipper Sean McDermott hit good points before the break for Western Gaels and their supporters were given great hope when Oisin Ward levelled just after half-time after the teams turned round with Brigid’s leading by 0-7 to 0-6.

Cathal McHugh, Gearoid Cunniffe, Senan Kilbride, Niall McInerney and Adrian Gleeson hit the target for Brigid’s to lead by 0-12 to 0-7 after 50 minutes before Stephen Ryan and Ward reduced the margin to a goal with three minutes remaining.

But that was as close as they got as Dolan, top scorer in the Roscommon final for the fourth year in a row, blasted home the game’s only goal and then landed a 45 for good measure.